Market euphoria cooled last week as global indexes marched cautiously lower after appearing to find a bottom. The Dow Jones and S&P 500 wrapped up the past 5 trading days -2.70% and -2.08% respectively. The VIX “fear gauge” fell 28.59% last week, the most since February 2018. Yet sentiment-linked crude oil prices surged over 31% in the best 5 days since at least 1983.

Recommended by Paul Robinson
Don’t give into despair, make a game plan
Get My Guide

Oil’s aggressive surge, alongside the Canadian Dollar, occurred amid expectations that the Saudi-Russia price war could come to an end as output might be reduced. Next week there will be an OPEC+ meeting with the goal to help stabilize energy prices. Though initially there appeared to be some confusion over the size of cuts as Saudi Arabia hoped developed countries could join in.

The US Dollar outperformed its G10 counterparts as aggressive US fiscal stimulus was priced in. The markets will continue assessing data from the world’s largest economy as it holds the most confirmed coronavirus cases at the time of writing. About 10 million citizens applied for jobless claims over the past 2 weeks as the country lost 701k jobs in March. That was the most since 2009.

Across the Atlantic Ocean, IHS data showed that the Euro-Area economy is at risk to contracting about 10% annually. Unsurprisingly the Euro treaded lower. Meanwhile gauges of business activity showed the Chinese economy recovering from dismal drops in February. The onslaught of data continues with a recovery in excess market volatility playing out. Can this hold?

Recommended by Paul Robinson
Are retail traders leaning into momentum or fighting it?
Get My Guide

The coming week could see a decision by the Eurozone nations on whether to issue bonds guaranteed by all of them jointly and severally – a ruling likely to have a major impact on the Euro’s next big move.

Gold prices may surrender if the FOMC meeting minutes further reinforce fears about the prospect of a deep, virus-driven recession amid thin liquidity conditions.

The Australian Dollar has already seen two RBA interest rate cuts in a month but now markets are looking for a third. If they get it, Aussie rates will be at zero for the first time.

Stock volatility has calmed somewhat despite continued economic uncertainty due to the coronavirus and containment guidelines as major central banks vow to prop up their economies at any cost.

Gold may continue to retrace the decline from the yearly high ($1704) as the price for bullion initiates a fresh series of higher highs and lows.

USD/CAD is caught at a bit of a cross-road, should start to iron itself out in the coming week; a low created late-March is an important spot to watch on the chart.

Upside momentum stalls with the DAX and FTSE 100 vulnerable to testing lower levels as the economic backdrop deteriorates further.

GBP/USD has faded over the week and is now eyeing further downside, while EUR/GBP has bounced of an important technical indicator.

The Japanese Yen faced a mixed week against currencies such as the US Dollar, Euro, British Pound and Canadian Dollar. What is ahead for USD/JPY, EUR/JPY, GBP/JPY and CAD/JPY? 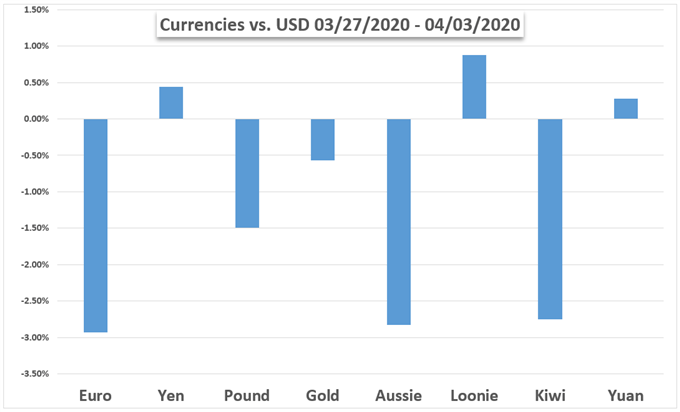