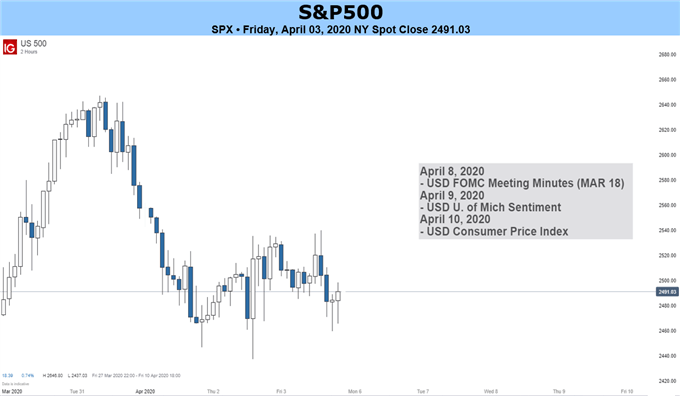 Global equities have steadied relative to the price action witnessed in recent weeks as the world’s major central banks and governments have acted to buoy their respective economies. Each country has pursued different policies that diverge in the finer details, but the underlying message is clear and unified – any policy that will help keep our economy afloat is an option. As a result, investors will track the efficacy of the employed policies while keeping an eye on the horizon for further procedures under consideration.

In the United States, the S&P 500, Dow Jones and Nasdaq 100 will look to progress on a proposed infrastructure package – said to be in the $4 trillion range. With interest rates low and unemployment soaring, bipartisan support for a country-wide infrastructure project should be easy enough to secure, although the specifics may spark disagreement. Either way, traders will look for news out of politicians on the likelihood and details of the stimulus. In the meantime, follow @PeterHanksFX on Twitter for updates and insights.

In the case of the FTSE 100, traders will look to the rate of bond-buying from the Bank of England which restarted its program alongside the European Central Bank. The two banks, in conjunction with the Federal Reserve, have also pumped liquidity into their banking systems and sought ways to get credit to endangered companies. If the Bank of England or UK Government can arrive at a solution to save threatened corporations, it may boost sentiment further and buoy some of the smaller players in the economy.

Shifting our focus to the Japanese Nikkei 225, market participants will keep a keen eye on the pace and depth of the Bank of Japan’s bond-buying program. As it stands, the central bank has said it will buy unlimited amounts of government bonds. As a result, it owns nearly half of Japan’s government bond market and its pace of purchasing has sharply increased since mid-March.

Coupled with their vast ownership of exchange traded funds and other markets, questions of sustainability will surely arise down the line, but for the moment – traders will look to gauge the effectiveness of the purchases. If other BOJ policies are any indication, the results will be underwhelming, and the Nikkei 225 may find itself meandering sideways despite unprecedented central bank intervention.