For the most part, global sentiment ended on an upbeat despite US President Donald Trump contracting the coronavirus. The Dow Jones, S&P 500 and Nasdaq Composite climbed over the past 5 trading sessions. The ‘risk-on’ tone greatly benefited the sentiment-linked Australian Dollar at the expense of the haven-oriented US Dollar as anti-fiat gold prices cautiously recovered.

September’s non-farm payrolls report missed expectations, with a drop in the labor force participation rate perhaps accounting for some of the declines in unemployment. This does fall in line in with what has been increasingly less-optimistic data surprises from the US since July. That has in turn placed great focus on prospects of additional fiscal stimulus.

While the House of Representatives passed the $2.4 trillion bill last week, it was on party lines, perhaps lowering the odds of it pushing past the Senate. This may be a recipe for disappointment in financial markets with FOMC minutes due this coming week. There the Fed may reiterate some of its cautious commentary on the economic outlook.

Brexit headlines also remain in the spotlight as the transition period inches closer towards its end this year. That is a catalyst for Sterling and FTSE 100 volatility. Speeches from Fed Chairman Jerome Powell, ECB President Christine Lagarde and BoE’s Governor Andrew Bailey are also in store next. Crude oil prices have been on the decline, now facing the latest OPEC world outlook.

Key developments coming out of Australia may influence AUD/USD as the update to the federal budget lines up with the Reserve Bank of Australia (RBA) meeting on October 6.

Former British Prime Minister Harold Wilson once said that ‘a week is a long time in politics’ and next week could prove to be a seminal few days for the British Pound.

The anti-risk Japanese Yen may rise if fading US fiscal stimulus hopes and FOMC meeting minutes pressure the S&P 500. What else does it face with the fourth quarter underway?

EUR/USD is no longer oversold after its bounce last week and an extension of its previous decline now seems likely short term. However, the outlook longer term is more positive.

Despite losses in September, equity markets rounded out the third quarter with gains as they transition into the fourth quarter. With a looming US Presidential election, further turbulence can be expected.

The Dollar – like risk assets – ended off this past week with another deep inhalation as market participants held their breath heading into October. With election, coronavirus and economic headlines already causing a stir; the President’s contraction ratcheted up uncertainty even further.

The gold bounce looks poised to end and turn into another leg lower soon.

The Japanese Yen’s resurgence last month may fail to carry over into October, as the haven-associated currency struggles to hold above pivotal chart support.

Once again, another volatile week for GBP albeit closing on a high note. Prospects of a Brexit deal are rising.

Australian Dollar is on the counteroffensive into the October open but remains vulnerable below trend resistance. The levels that matter on the AUD/USD technical chart.

The Dow Jones Industrial Average may attempt a trend reversal after forming an “AB=CD” pattern. Immediate resistance can be found at 27,850 - the 50-Day SMA.

US Dollar Technical Forecast: USD Wedges into the Weekend

After a sell-off drove USD price action for almost six months, a big zone of long-term support came into play. But can USD bulls continue to drive through Q4 trade?

The Euro may have started the next major leg in its 12-year downtrend against the US Dollar, with scope for an extended drop back below parity in the months ahead. 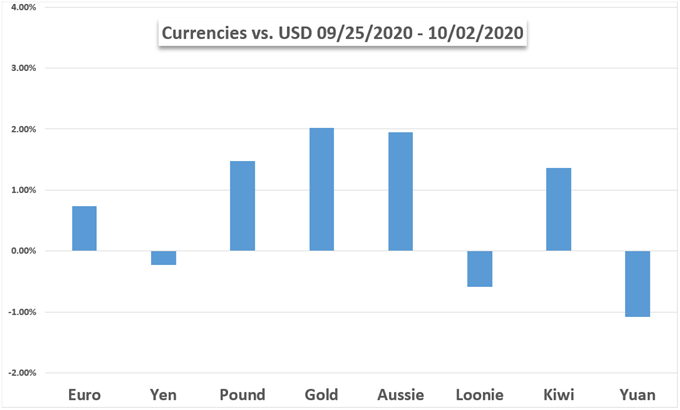