AUD/USD extends the rebound from the September low (0.7006) ahead of the Reserve Bank of Australia (RBA) meeting on October 6, and key developments coming out of Australia may influence the exchange rate as Treasurer Josh Frydenberg is scheduled to deliver the federal budget update after the interest rate decision.

AUD/USD retraces the decline from the 2020 high (0.7414) despite speculation for a RBA rate cut, and it remains to be seen if the central bank will take additional steps to support the economy as Deputy Governor Guy Debellewarns that “under the central scenario, it would be more than three years before sufficient progress was being made towards full employment to be confident that inflation will be sustainably within the target band.”

In turn, the ASX 30 Day Interbank Cash Rate Futuresreflect a greater than 60% probability for a rate cut as Governor Philip Lowe and Co. “consider how further monetary measures could support the recovery,” and the Australian Dollar may face headwinds if the RBA reduces the official cash rate (OCR) to a fresh record low.

However, the RBA may stick to the sidelines after tweaking the Term Funding Facility (TFF) in Septemberas “fiscal policy was well placed to continue to support the recovery,” and Governor Lowe and Co. may rely on Australian lawmakers to further insulate the economy as the central bank rules out a negative interest rate policy (NIRP).

As a result, the pullback from the yearly high (0.7414) could end up being an exhaustion in the bullish trend rather than a change in AUD/USD behavior if the RBA retains the current path for monetary policy, and the recent shift in retail positioning may also have been a temporary event like the weakness in the exchange rate as traders turn net-short in October. 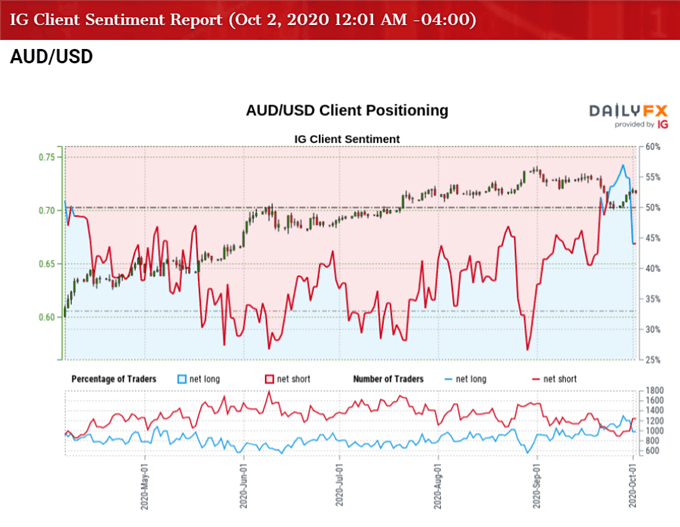 The decline in net-long position could be a function of profit-taking behavior as AUD/USD extends the rebound from the September low (0.7006), but the jump in net-short interest suggests the tilt in retail sentiment will resurface to mimic the crowding behavior from earlier this year.

With that said, key developments coming out of Australia may drag on AUD/USD if the RBA deploys more unconventional tools to foster a stronger recovery, but more of the same from Governor Lowe & Co. may keep the exchange rate afloat as key market trends look poised to persist in October.