The Japanese Yen’s resurgence last month may fail to carry over into October, as the haven-associated currency struggles to hold above pivotal chart support.

The Japanese Yen could continue to slide lower against its major counterparts in the near-term, after failing to break above the sentiment-defining 200-day moving average and dipping back below the 100-DMA.

The RSI’s failure to break into overbought territory and a bearish crossover on the MACD indicator is indicative of swelling downside momentum, which may ultimately generate a more extensive downside push if price breaks back below the August high.

Therefore, failure to hurdle confluent resistance at the March low and downtrend extending from the yearly high could signal the resumption of the primary uptrend and bring the September low back into focus. 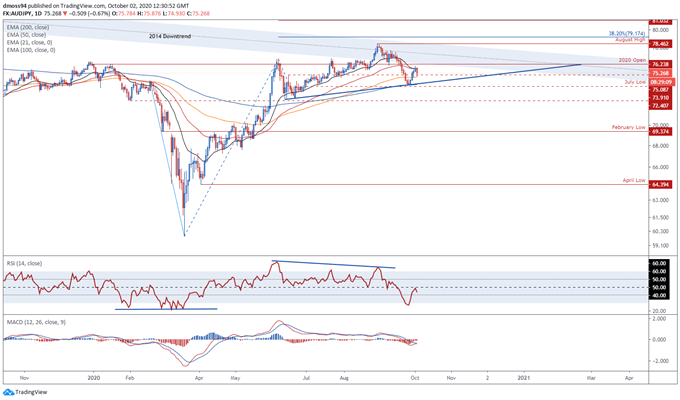 AUD/JPY rates could be poised to reverse lower in the coming days if resistance at the 21- and 50-DMA (75.75) continues to stifle upside potential.

With the MACD indicator tracking firmly in bearish territory and the RSI dipping back below its neutral midpoint, the path of least resistance seems skewed to the downside.

However, if price remains constructively perched above the June 16 swing-high (75.08) and can breach resistance at the yearly open (76.24), a retest of the yearly high (78.46) could be in the offing.

Conversely, a daily close below psychological support at the 75.00 mark may intensify selling pressure and push AUD/JPY back to the uptrend extending from the June 12 swing-low (72.53) 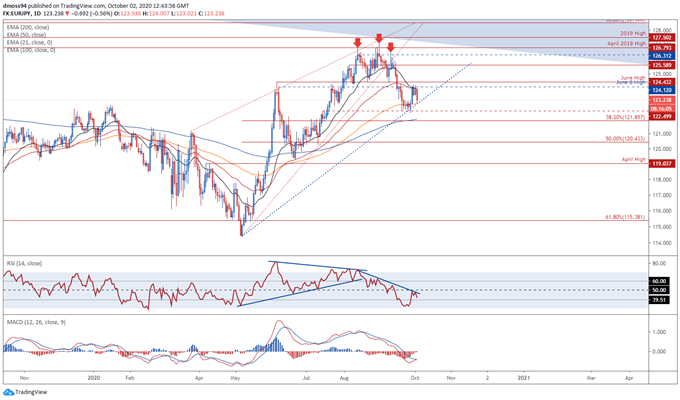 Despite breaking the neckline of Head and Shoulders reversal pattern and slicing through Rising Wedge support, EUR/JPY rates look poised to climb back towards the June high in the short-term.

A bullish crossover on the MACD indicator may encourage would-be buyers if confluent support at the 100-DMA (122.97) and uptrend extending from the May low (114.39) remains intact, with a daily close back above the June high (124.43) needed to carve a path for price to test the yearly high (127.07).

That being said, the RSI’s struggles to snap the downtrend extending from the August extremes hints at building bearish momentum and may ultimately result in a more extensive correction in EUR/JPY rates, if sellers can successfully drive price back below psychological support at the 122.00 mark.