US stock indexes surged on Friday after the US non-farm payrolls report for October muddied market-based Fed rate hike bets. The Dow Jones Industrial Average (DJIA) trimmed its weekly loss to 1.4% after rising 1.26% on Friday. The US Dollar DXY Index plummeted nearly 2% after rate traders shaved seven basis points off the 2-year Treasury yield. Gold rocketed 3% to its highest point since early October.

The market focus now shifts to the October consumer price index (CPI) due Thursday. Estimates see core inflation—a measure that excludes volatile food and energy prices—crossing the wires at 6.5% from a year ago, according to a Bloomberg survey. That would be down from September’s 6.6% y/y figure. A miss on that figure would likely encourage more risk-taking as traders appear ready to buy on data that would prompt the Fed to ease its rate-hiking path.

The Hang Seng Index (HSI) put in an impressive 8.73% gain to end the week, and China’s tech-heavy CSI-300 Index rose over 6%. According to a Reuters report, citing a recording of a former Chinese disease official, China is preparing to relax its strict Covid rules early next year. US accountants have also finished an audit of US-listed Chinese stocks ahead of schedule, according to Bloomberg. The Chinese Yuan gained over 2% versus the Greenback.

China, on Thursday, will release updated credit numbers for October. Analysts expect to see 800 billion in new loans for October, which would mark a reduction from the September figure (+2.5 trillion). Another upside surprise may fuel additional risk-taking, especially for China-sensitive currencies like AUD and NZD. A nearly 8% rise in iron ore prices aided the Australian Dollar.

A still-aggressive Reserve Bank of New Zealand (RBNZ) is giving the New Zealand Dollar a regional advantage. The Bank of Japan remains committed to its ultra-loose policy setting, while the Reserve Bank of Australia sticks with a reduced pace of tightening. NZD/JPY rose 1.5%, and AUD/NZD fell to its lowest point since April. Australian consumer confidence on Monday will kick off the APAC economic docket.

The Michigan consumer sentiment survey is expected to decline to 59 for November, with the data due on Friday offering another potential cue for gauging the Fed’s outlook. The United Kingdom’s third-quarter gross domestic product (GDP) growth rate is also on tap. The Bank of England lifted rates to 3% and warned that the UK faces a protracted slowdown. The British Pound fell 2% against the USD and Euro. 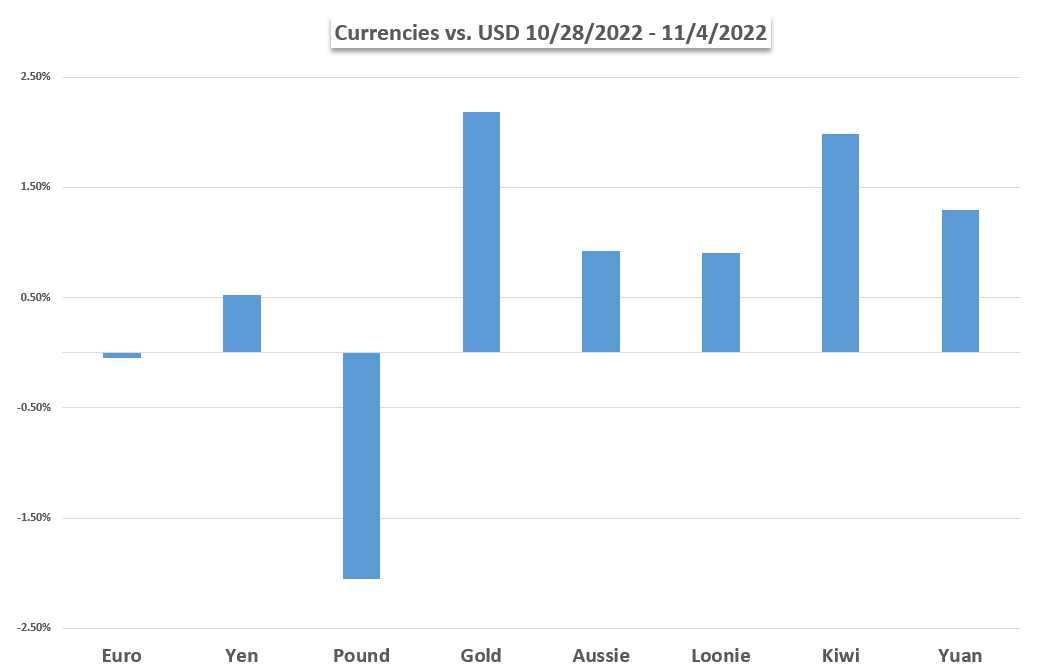 S&P 500, Nasdaq 100 Week Ahead Forecast: Inflation Could Make or Break the Market

The U.S. inflation report will be the main catalyst for stocks next week. For the S&P and Nasdaq 100 to have a meaningful chance to move higher, the CPI data must show a significant slowdown.

Gold Price Defends Yearly Low with US CPI on Tap

The update to the US Consumer Price Index (CPI) may prop up the price of gold as the report is anticipated to show easing price pressures.

EUR/USD begins the week on the front foot post-NFP but key inflation releases this week could turn the tide.

The Japanese Yen gained against the US Dollar last week. Still, it remains a tough road ahead for the currency. All eyes turn to the next US inflation report.

GBP/USD fell by over 3 big figures on the week as a hawkish Fed and growth warnings from the BoE left cable struggling to find support.

The Australian Dollar lost ground after the RBA continued to tilt away from a hawkish stance and the US Dollar was underpinned by a Fed hosing down inflation. Will AUD/USD go lower?

Canadian dollar looks set to enjoy a bullish week thanks to a host of confluences. Will the US inflation print scupper CAD gains against the Dollar?

The Fed inspired USD rally reversed on the heels of strong NFPs on Friday with DXY threatening a deeper correction. The levels that matter on the weekly technical chart.

US stocks have an important week ahead as it appears they are in need of building on last week’s late push higher.

The Japanese Yen is trading at or near notable technical levels against the US Dollar, Swiss Franc and Australian Dollar. Here are the charts to watch for USD/JPY, CHF/JPY and AUD/JPY.

Gold and Silver Technical Outlook: Modest Gains in the Cards?

Gold and silver appear to have found a short-term floor and could be set to rise toward the upper end of their respective ranges. What are the key levels to watch?

It was a brutal week for the British Pound until a Friday pullback erased the bulk of Thursday losses in GBP/USD. GBP/JPY and EUR/GBP may have cleaner technical context at the moment.