Concerns about the Omicron Covid-19 variant faded amid preliminary reports that the Pfizer BioNTech vaccine neutralized Omicron with a third dosage. Towards the end of this past week, an in-line US CPI report, showing inflation around a 40-year high, did little to further boost hawkish Federal Reserve monetary policy expectations. Sentiment also remained intact despite Evergrande, a troubled Chinese property giant, being declared in default following two missed coupon payments this past week.

Central banks from the world’s largest economic powerhouses are on tap. All eyes are on the Fed, where traders will be tuning in for their economic projections and decision on whether or not policymakers will speed up the pace of tapering asset purchases. The European Central Bank, Bank of England and Bank of Japan are also on top for the Euro, British Pound and Japanese Yen respectively. Commentary on their views on inflation will be in focus. Speaking of, CPI will be released from the United Kingdom and Canada. Australia releases its latest jobs report. What else is in store for markets ahead? 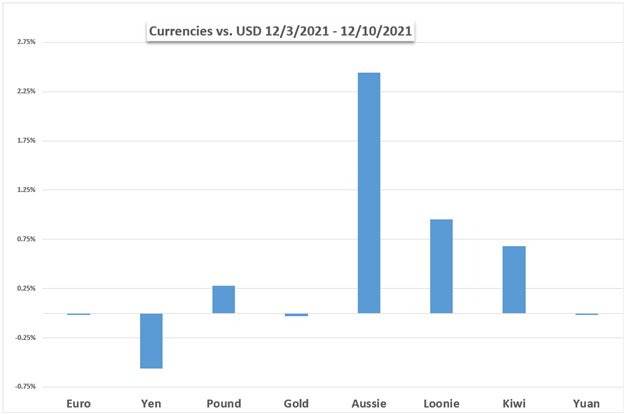 The Dow Jones, S&P 500 and Nasdaq 100 are eyeing the Federal Reserve. Will the central bank speed up the pace of tapering its balance sheet? What does that mean for stocks?

US inflation rates haven’t been this high since 1982, and the jobs market continues to improve. Has the market already discounted a more hawkish Federal Reserve?

Where the Euro goes from here will depend on what the ECB decides on monetary policy at this Thursday’s meeting of its Governing Council, and that is unusually difficult to predict.

The Australian Dollar found support as shorts were squeezed, but will it be enough for AUD/USD gains in the face of a dovish RBA against a hawkish Fed?

Bitcoin (BTC), Ethereum (ETH) – Down But Not Yet Out

After last weekend’s brutal sell-off, the cryptocurrency market has regained some composure and looks set for a period of consolidation around its current levels if support levels hold.

GBP Forecast: GBP/USD in the Eye of the FOMC/BOE Volatility Storm

Gold prices trimmed losses into the weekend after the highest US CPI print since 1982. US breakeven rates have faded despite hot inflation numbers. The FOMC meeting will likely provide bullion’s next move.

The US Dollar Index (DXY) may reestablish an upward trend following the Federal Reserve interest rate decision as it appears to be trading within a bull flag formation.

Stock Market Forecast for Next Week: Santa Coming to Town?

Stocks continue to look bullish even if there is minor near-term weakness; levels, lines, and scenarios to watch in the days ahead.

It’s a big week for the beleaguered British Pound, with job numbers, CPI and a rate decision all on the calendar to go along with a major FOMC rate meeting on Wednesday.

While the longer-term bullish trend remains intact, the potential for a major reversal has reared its head this week.