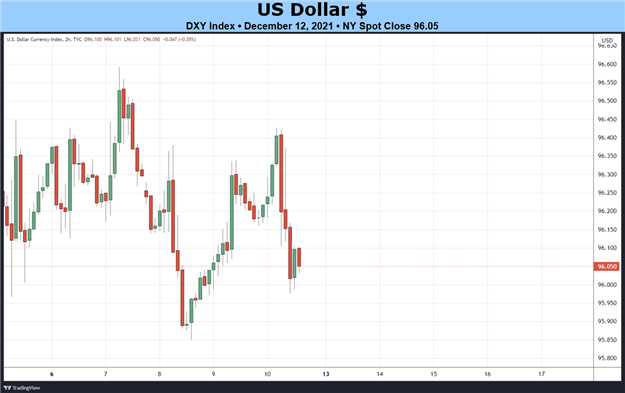 Consistent with its mediocre December seasonal tendency, the US Dollar (via the DXY Index) edged lower during the second week of the month. The DXY Index shed -0.11% over the week, and is now up by +0.18% in December. The largest component of the DXY Index, EUR/USD, added +0.09%. GBP/USD rates gained +0.27% while USD/JPY rates appreciated +0.50%. The commodity currency trio were the most significant movers on the week. USD/CAD rates dropped by -0.87%, while two non-DXY components, AUD/USD and NZD/USD rates, added +2.49% and +0.71%, respectively.

US Economic Calendar in Focus

The middle of December brings about another saturated economic calendar for the US economy. While there are only three ‘high’ rated events in the days ahead, a slew of ‘medium’ ranked releases will keep event risk on the radar Tuesday through Friday. Federal Reserve policymakers’ speeches resume at the end of the week after the communications blackout period ends. 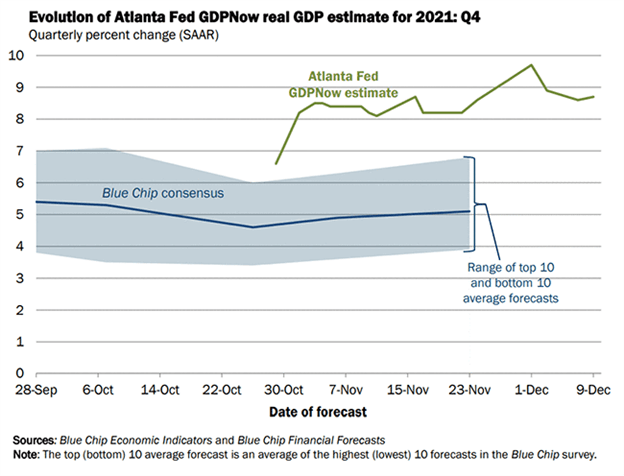 Based on the data received thus far about 4Q’21, the Atlanta Fed GDPNow growth forecast is now at +8.7% annualized. The elevated forecast comes as “the nowcast of the contribution of inventory investment to fourth-quarter real GDP growth increased from +1.51% to +1.59%.”

The next update to the 4Q’21 Atlanta Fed GDPNow growth forecast is due on Wednesday, December 15 after US retail sales and inventories figures are released. 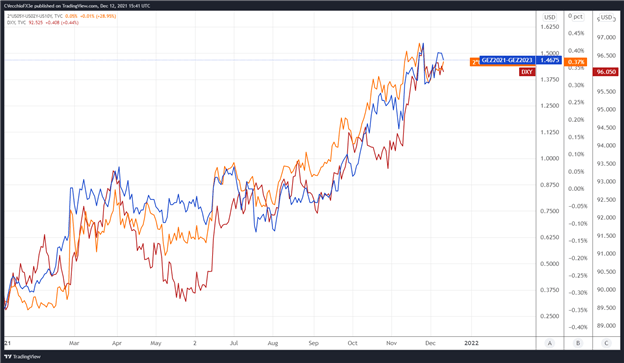 There are 146.75-bps of rate hikes discounted through the end of 2023 while the 2s5s10s butterfly is just off of its widest spread since the Fed taper talk began in June (and its widest spread of all of 2021). Ahead of the December Fed meeting, rates markets are effectively pricing in a 91% chance of five 25-bps rate hikes over the next two years – not significantly changed from prior to Thanksgiving, when Fed Chair Powell’s more hawkish commentary emerged.

In order to achieve such a rate lift off, the Federal Reserve will likely need to begin rate hikes by mid-2022. As such, consistent with comments made by Fed Chair Powell as well as incoming Fed Vice Chair Lael Brainard, it seems more likely than not that the FOMC will announce an accelerated timeline to taper its QE program, increasing the rate of tapering from $15B/month to $30B/month beginning in January 2022. This would end the Fed’s QE program in March 2022, allowing for the first 25-bps rate hike by June 2022. 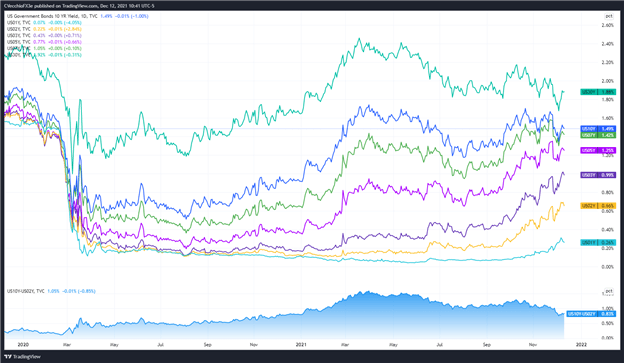 Historically speaking, the combined impact of falling US Treasury yields – particularly as intermediate rates outpace short-end and long-end rates – alongside elevated Fed rate hike odds has produced a favorable trading environment for the US Dollar. 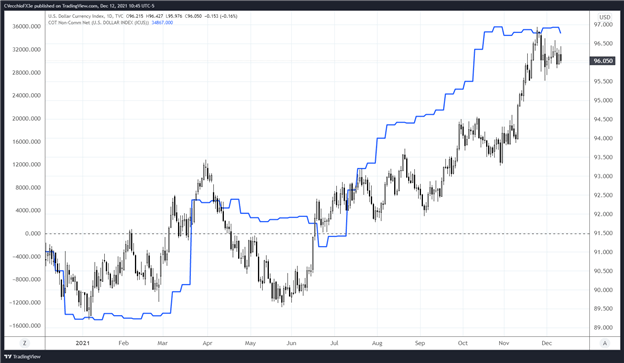