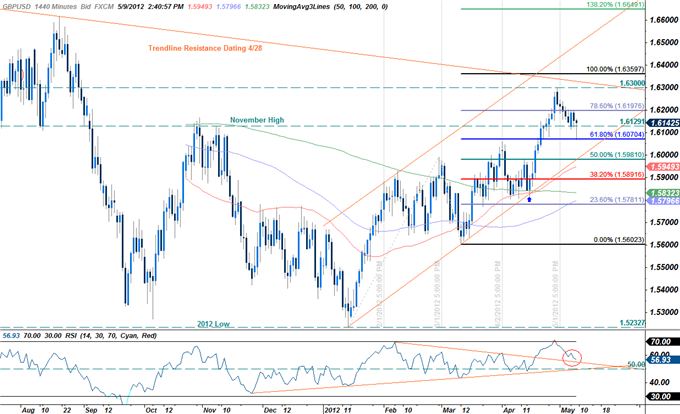 Although the Bank of England is widely expected to maintain its current policy stance in May, the bullish sentiment underlining the British Pound may gather pace as the central bank adopts a hawkish tone for monetary policy. As the BoE preserve its wait-and-see approach, we may see the Monetary Policy Committee refrain from releasing a policy statement, but the quarterly inflation on tap for May 16 may trigger fresh highs in the GBPUSD should the central bank raise its fundamental assessment for the U.K. Indeed, we should see the MPC move away from its easing cycle as BoE officials anticipate to see a faster recovery in the second-half of the year, and the board may start to lay out a tentative exit strategy as the stickiness in underlying price growth raises the risk for inflation.

As the outlook for growth and inflation picks up, we should see the BoE adopt a hawkish tone for monetary policy, and a fresh batch of central bank rhetoric may spark fresh highs in the GBPUSD as market participants start to look for a rate hike. However, the ongoing slack within the real economy paired with the slowdown in wage growth may encourage the BoE to strike a balanced tone for the region, and we may see the central bank carry its current policy stance into the second-half of the year as the recession in the euro-area – Britain’s largest trading partner – dampens the outlook for growth. In turn, a neutral policy statement may halt the bullish run in the GBPUSD, and the pair may ultimately face range-bounce prices as market participants maintain bets for more easing.

A look at the encompassing structure sees the pound continuing to trade within the confines of a well-defined ascending channel formation dating back to the January low with the downside correction off the 2012 high at 1.63 finding ample support at the 61.8% Fibonacci extension taken from the January and March troughs at 1.6070. While our medium-term bias remains weighted to the topside, it’s important to note that broader risk trends may continue to drag on the pound, limiting advances in the near-term. We continue to favor long entries between the 1.60-handle (channel support) and the 1.6070-mark with a breach above the 78.6% extension at the 1.62-figure dispelling further downside pressure. Such a scenario eyes topside targets at the 1.63-handle and the 100% extension at 1.6360. 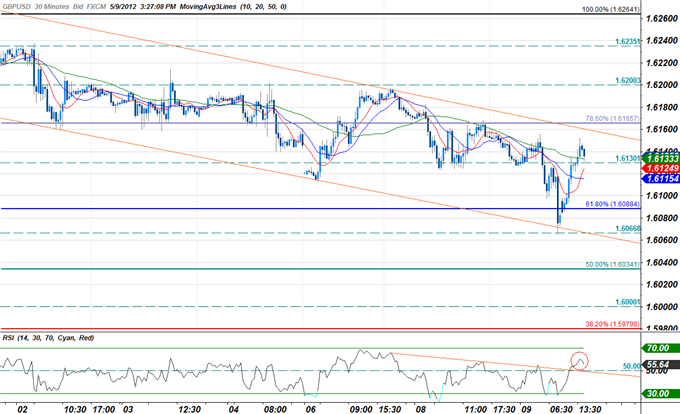 The scalp chart shows the GBPUSD holding within the confines of a descending channel formation dating back to the April 30th high with the pair testing channel support early in the US session. Soft interim support rests at 1.6130 backed by the 61.8% Fibonacci extension taken from the March 12th and April 5th troughs at 1.6088 and 1.6065. A break below the 50% extension at 1.6035 risks further losses for the pound with subsequent floors seen at the 1.60-figure and the 38.2% extension at 1.5980. A breach above channel resistance targets the 78.6% extension at 1.6165, the 1.62-figure, 1.6235 and the 100% extension at 1.6265, with a breach above the 2012 high at 1.63 exposing our objective at 1.6360. As the BoE maintains its current policy we may see a muted reaction to the release. However we will be closely eyeing these levels as we head into the quarterly inflation report due out on May 16th.

Trading the BoE rate decision may not be as clear cut as some of our previous trades as the BoE is widely expected to preserve its current policy stance, but a hawkish policy statement could set the stage for a long British Pound trade as it raises the scope for a rate hike. Therefore, if the central bank sees a greater risk for inflation and continues to favor a stronger recovery for the second-half of 2012, we will need a green, five-minute candle following the decision to generate a buy entry on two-lots of GBPUSD. Once these conditions are fulfilled, we will set the initial stop at the nearby swing low or a reasonable distance from the entry and this risk will establish our first target. The second objective will be based on discretion, and we will move the stop on the second lot to cost once the first trade hits its mark in order to preserve our profits.

On the other hand, we may see board member David Miles continue to push for more quantitative easing amid the ongoing slack within the real economy, and the majority may carry its neutral policy stance into the third-quarter in an effort to encourage a stronger recovery. As a result, if we see a growing rift within the MPC, with the board highlighting the downside risks surrounding the region, we will carry out the same strategy for a short pound-dollar trade as the short position laid out above, just in reverse. 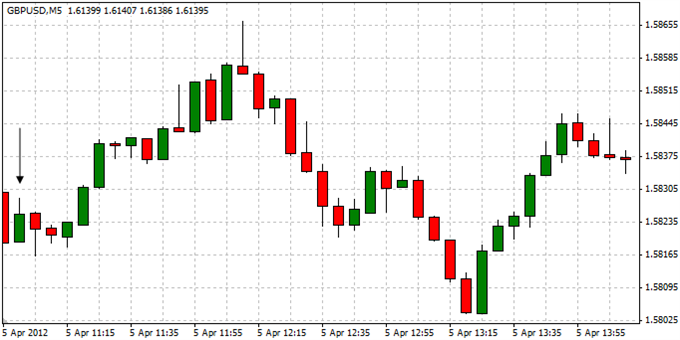 As expected, the Bank of England preserved its current policy in April, which produced a fairly muted reaction in the British Pound, but the meeting minutes sparked a sharp rally in the GBPUSD as the MPC voted 8-1 to keep the benchmark interest rate at 1.00% while holding the asset purchase target at GBP 325B. Indeed, board member Adam Posen scaled back his view for more QE as BoE officials expect to see a stronger recovery later this year, and it seems as though the central bank is looking to conclude its easing cycle this year as the committee no longer sees a risk of undershooting the 2% target for inflation.