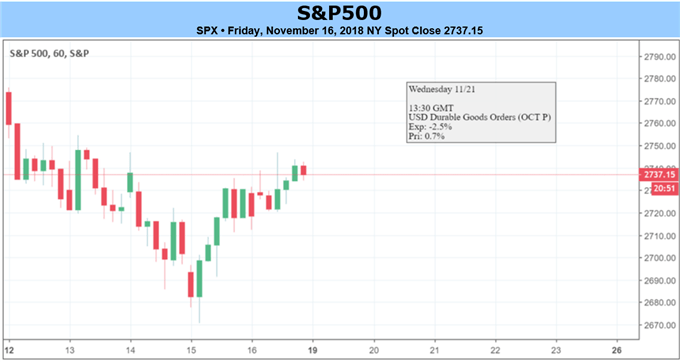 For more information, check out Justin's weekly webinar where he discussed the impact of Brexit and Italy.

The political backdrop looks bleak for the UK as PM May struggles to bring her party together to support her Brexit plans. Unlike the Pound, this has not led to a large degree of strong selling in the FTSE 100. Partly because the sell-off in the Pound has eased the downside for the more internationally exposure FTSE 100. On the technical front, the 7000 level continues to provide firm support and curb the index of further selling. However, given the uncertainty over Brexit and with a leadership challenge potentially on the horizon, risks remain tilted to the downside. A break and close below 7000 can open a move towards 6950 with a larger move back towards the YTD low of 6840.

A flurry of cautious statements from key Fed Official has caught many by surprise with both US yields and Dollar slipping. Fed’s Powell and Clarida had both highlighted that US may face headwinds next year with signs of a slowdown in global growth, while fiscal stimulus effects fade. Now, while this will unlikely impact the December rate hike. Further rate increases going forward have come under question with money markets pricing at rate hikes from the Fed.

Having mentioned last week, the 61.8% Fibonacci Retracement of the October drop had been rejected, thus prompting renewed selling in the index. However, support at 2700 and 2690 (marks the 23.6% Fibonacci Retracement) is holding. Alongside this, the risk on/risk off barometer is notably off the lows albeit lacking firm direction, implies a period of consolidation in the near term.

Last week saw Italy yet again defy the European Commission and stick to its big spending budget plan, keeping the deficit target at 2.4%. Consequently, the EU will now decide whether to begin measures to discipline Italy through possible fines. As such, sentiment for Italian assets remain negative with banks likely to underperform amid further uncertainty. Focus for bears is the 18400 level, which has previously been defended.