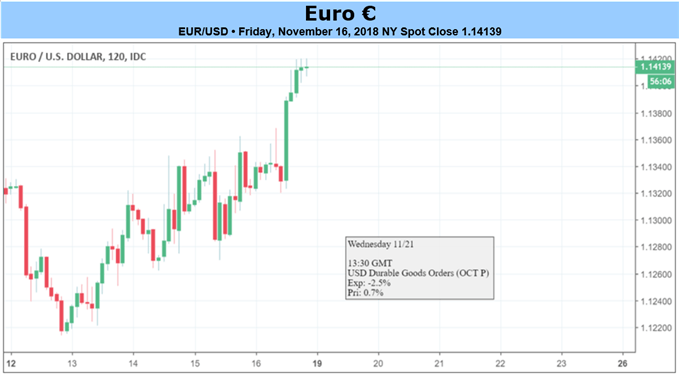 EUR/USD quickly approaches the monthly-high (1.1500) as fresh comments from Federal Reserve officials sap bets for an extended hiking-cycle, but the European Central Bank’s (ECB) account of the October meeting may undermine the recent advance in the exchange rate as the Governing Council remains in no rush to remove the zero-interest rate policy (ZIRP).

Remarks from Federal Reserve Vice-Chairman Richard Clarida suggest the central bank remains hesitant to implement above-neutral interest rates with the world economy showing ‘some evidence that it’s slowing,’ and the Federal Open Market Committee (FOMC) may continue to project a longer-run benchmark interest rate of 2.75% to 3.00% at its last meeting for 2018 as ‘risks to the economic outlook appear roughly balanced.’

However, the FOMC may have little choice but to respond to the shift in U.S. trade policy as higher tariffs inflate input prices, and the committee may temporarily implement above-neutral interest rates in an effort to keep inflation around the symmetric 2% target. 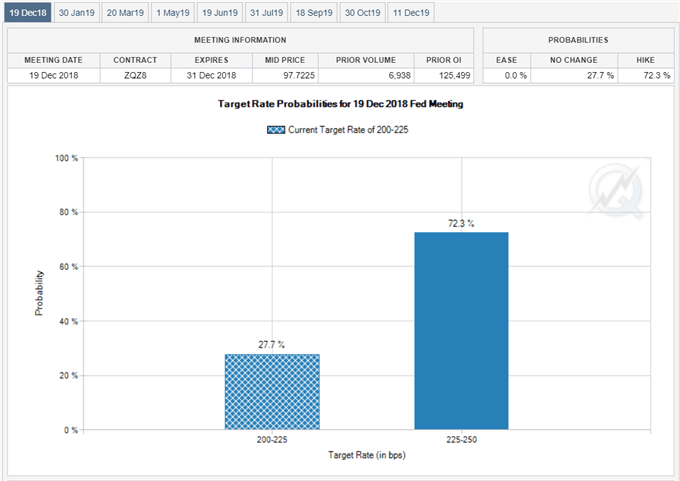 With that said, Chairman Jerome Powell & Co. may ultimately deliver a hawkish rate-hike in December, and the central bank may continue to prepare U.S. households and businesses for higher borrowing-costs in 2019 as it achieves its dual mandate for monetary policy.

Until then, recent price action warns of a larger recovery in EUR/USD as the bearish momentum abates, but a batch of dovish comments from the ECB may tame the recent advance in the exchange rate as President Mario Draghi & Co. remain in no rush to alter the monetary policy outlook. The ECB may continue to run the clock even after the quantitative easing (QE) program expires at the end of the year as ‘measures of underlying inflation remained generally muted,’ and the Governing Council may continue to dispel speculation for an imminent rate-hike as officials expect euro-area interest rates ‘to remain at their present levels at least through the summer of 2019.’

With that said, the diverging paths for monetary policy casts a long-term bearish outlook for EUR/USD, but the exchange rate may stage a larger recovery over the coming days as it extends the series of higher highs & lows from earlier this week, while the Relative Strength Index (RSI) appears to be breaking out of the bearish formation carried over from the previous month. 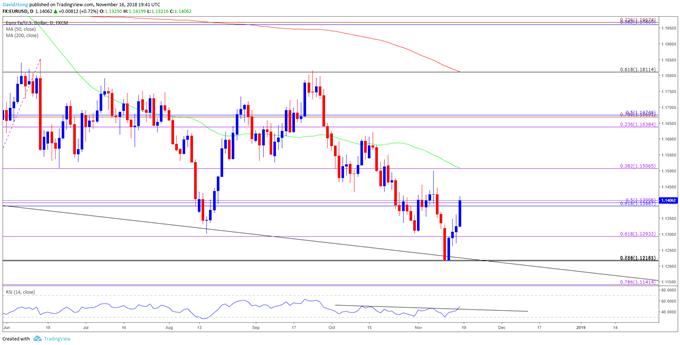 Failure to hold the August-low (1.1301) suggests the broader outlook for EUR/USD remains tilted to the downside, but the 1.1220 (78.6% retracement) area appears to be offering short-term support as the exchange rate snaps the bearish sequence from the previous week and initiates a fresh series of higher highs & lows.

For more in-depth analysis, check out the Q4 Forecast for Euro