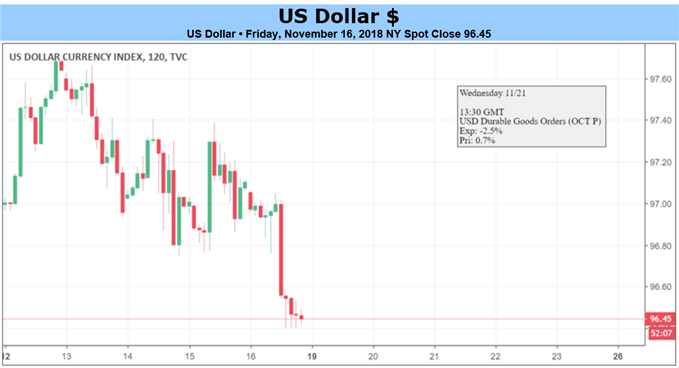 Homegrown schedule event risk will be sparse in a holiday-shortened week ahead, leaving the US Dollar at the mercy of European politics once again. Liquidity will begin to drain ahead of market closures for Thursday’s Thanksgiving holiday and is likely to remain diminished into the weekend.

Heading into the holiday lull, crosscurrents from Europe are likely to remain in focus. In the UK, Prime Minister Theresa May is struggling to keep her job as eurosceptic members of her own Conservative party balk at the Brexit deal she negotiated with the EU.

If she is deposed and her accord with Brussels torn up, the probability of a chaotic “no-deal” Brexit will soar because there is almost certainly insufficient time to cobble together a replacement before a March deadline. Such a prospect is likely to trigger market-wide risk aversion, boosting the Greenback.

Italy is another flashpoint. The European Commission will offer its assessment of Rome’s resubmitted budget on Wednesday, which is unchanged from the one it has already pegged as violating regional fiscal rules. If that paves the way for escalating tensions and punitive action, the Dollar may enjoy a further lift.

November’s preliminary PMI surveys – due Friday – amounts to the most potent bit of data flow on offer. They are expected to show that manufacturing- and service-sector activity growth accelerated from October, the former for a third and the latter for a second consecutive month.

Markets latched on to seemingly cautious Fed rhetoric about external headwinds last week, slashing the priced-in 2019 rate hike outlook implied in Fed Funds futures and weighing on the currency. US data flow has increasingly improved relative to forecasts however.

The Fed is surely not blind to macro influences, but any negative spillover will have to make its way into the real economy before the tightening cycle is meaningfully altered. There is no evidence of this thus far. Upbeat data highlighting as much may revive hawkish speculation, offering USD another tailwind.