S&P 500 Elliott wave patterns point to a correction to relieve the recent buying trend. US Dollar Index appears to be bursting higher out of a triangle pattern.

The video above is a recording of a US Opening Bell webinar from March 11, 2019. We focused on the Elliott Wave patterns for key markets such as SP 500, Nasdaq, DXY, EURUSD, NZDUSD, AUDUSD, USDJPY, NZDUSD, AUDUSD, USDZAR, gold, silver and crude oil.

There are three main Elliott wave patterns we are following for S&P 500. The common thread in these patterns is a near term correction to release buying pressure may be on the horizon. If a correction takes hold, the behavior around the 2525-2625 zone will paint the picture for the next potential move.

Though new highs above the October 3, 2018 high cannot be ruled out, the Elliott wave patterns suggest the current up trend may be the ‘b’ wave of a flat or triangle. If so, then if prices break above the October 3 high, we may see a temporary break followed by a correct back down towards the December low. In essence, this up-trend may be a sucker’s wave higher.

Difference Between Dow, Nasdaq, and S&P 500 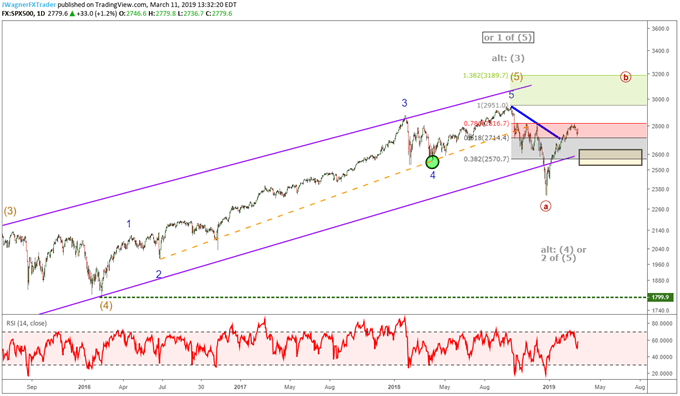 US Dollar Index pops, but upside may be limited

The US Dollar Index rallied last week. The two favored Elliott wave counts we are following suggest a breakout higher may be temporary followed by a minimal retracement back to the 93 handle.

The favored wave picture we are following is that US Dollar Index finished a ‘b’ wave triangle on February 27. This implies a pop higher in the ‘c’ wave of a zigzag pattern. Though DXY has met the minimum levels of this pop higher, it would be normal for this market to scoot higher to 100-101. However, the 2017 high of 103.82 likely holds so upside appears limited.

If a top is formed from not far above current levels, then we’ll consider a deep correction back down to the 93 handle and possibly into the low 80’s for the latter part of calendar year 2019. 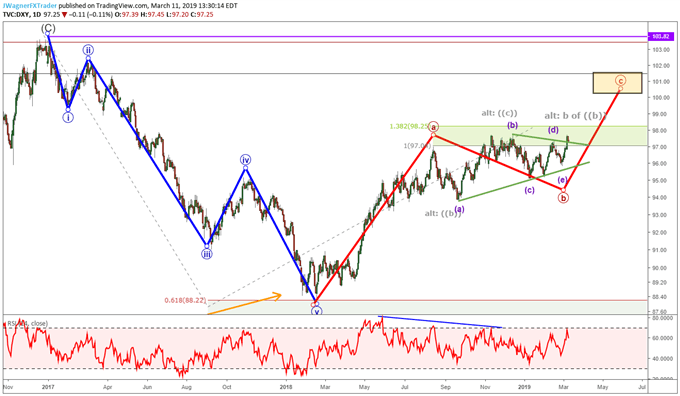 Gold price in the middle of a bearish zigzag pattern

In last week’s webinar, we warned of further losses on the horizon for gold and silver. The recent dip in gold prices appears to be wave ‘a’ of a bearish zigzag. That implies wave ‘b’ of the zigzag pops gold prices higher to correct a portion of the February down trend. Once that bounce is exhausted, look for another bearish wave in gold to dig into the mid 1200’s in a final leg of a multi-year triangle. Therefore, gold prices may see 1200-1250 over the coming weeks. 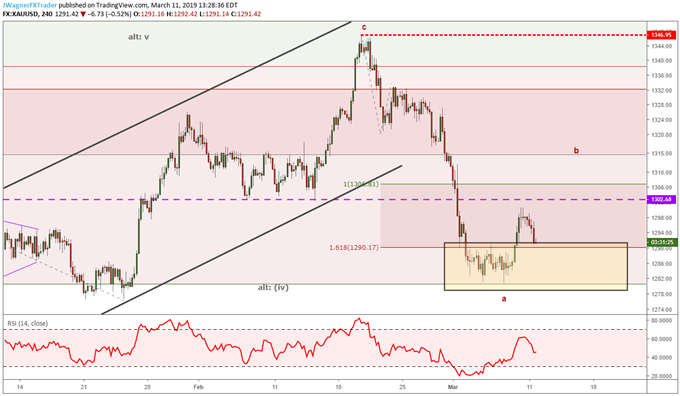 USDZAR Has Biggest Monthly Gain Since August – More to Come?