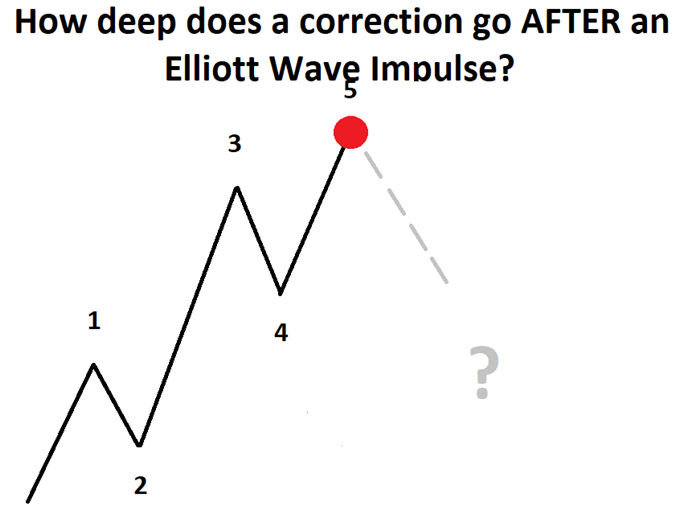 The Elliott wave impulse pattern is a foundational pattern of Elliott Wave Theory. Ralph Nelson Elliott discovered back in the 1930s that the market moved in waves of five and three legs. These five and three wave patterns make up larger patterns that can be used to determine how mature the current trend is and where likely levels of retracement may take place. Today, we will focus on likely levels of retracement after an Elliott wave impulse pattern completes.

Elliott wave impulse patterns appear only in certain spots of the Elliott wave sequence. Therefore, it is important to know not only where an impulse wave may form, but also to know where the impulse wave may NOT be found. Knowing these positions can help you anticipate the depth of the subsequent correction giving you guidance on how aggressive to pursue the anticipated wave.

Since the market is fractal, let’s break down the Elliott wave impulse so that two degrees of trend are visible. On the image below, you will find 21 sub-wave labels (blue and red) that make up the larger five wave impulse (black).

Impulse waves might make up a portion of a corrective wave, but not ALL of the corrective wave. For example, it could be wave a of 2. However, an impulse will not be ALL of wave 2 because only 3 waves are present. Out of these 21 sub-waves in an impulse, only wave iii and wave 3 MUST BE impulse waves themselves. 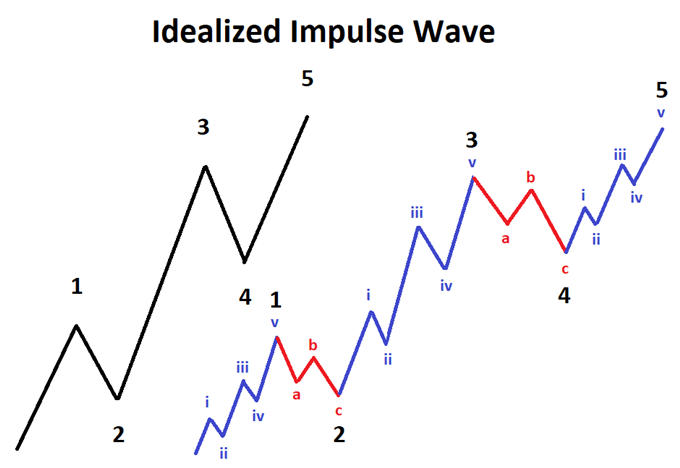 As you can see above, the location of the final impulse wave can have a dramatic effect on what is expected to happen on the next move. Sometimes, the retracements are relatively shallow retracing only 38%. Sometime, the corrections can be large so as to fully retrace the previous impulse wave. There is one thing in common between all scenarios in that a minimum retracement to the previous fourth wave typically occurs. Bear in mind that if you are analyzing a sequence that is terminating at a longer term and higher degree, then these corrections can be quite large and damaging.

how do I know which Elliott wave scenario(s) to follow?

Elliott wave is deductive by nature. Anything is possible until we can eliminate those scenarios that break one or more of Elliott’s rules. From there, we assess the probability of a scenario based on the look and feel of the wave picture based on numerous guidelines. Therefore, if you believe an impulse wave is nearing its final stages, zoom out to see what larger pattern that impulse wave is constructing. Based on what you identify through that deductive process, you can focus on a small number of scenarios above. Therefore, if you can identify and count the completed impulse wave, you can begin to identify minimum targets for a corrective move. A novice Elliott wave technician can further eliminate those scenarios above that do not fit within the larger picture.

Jeremy is a Certified Elliott Wave Analyst with a Master’s designation. You can follow his Elliott wave analysis via regularly published Elliott wave articles and through his US Opening Bell webinar.

Communicate with Jeremy through the comments section below.

Learn more about how Jeremy got started into Elliott wave from his podcast interview on Trading Global Markets Decoded. You can access through: