What is a Triangle Pattern In Elliott Wave Theory and How do you Trade it?

If you zoom in on the construction of the triangle, you should be able to identify three wave corrective moves for each of the five waves. (See image below) 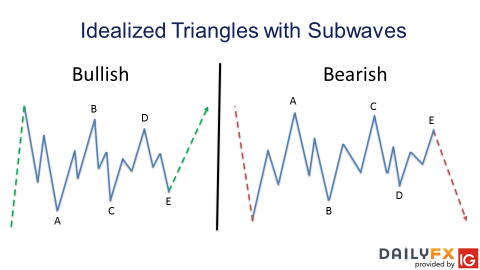 Rule #2: The sub waves must be zigzags, multiple zigzags, or triangles.

I have mentioned many times before how the zigzag is one of the building blocks for the Elliott Wave patterns. At least four of the waves must be zigzags. One wave can be more complex like a multiple zigzag or even another triangle.

Rule #3: Wave ‘C’ cannot move beyond the ending price of wave ‘A’

Rule #4: Wave ‘D’ cannot move beyond the ending price of wave ‘B’

On each of the rules above, the final three waves of the triangle become progressively shorter than the previous wave. As a result, when you draw trend lines connecting the wave extremes, the pattern takes shape of a triangle.

Typical spots in the wave structure where you might find a triangle:

Therefore, when you correctly identify a triangle, it can tip you off as to the larger wave sequence because it provides a warning that the next move is likely an ending wave!

Lastly, sometimes you can estimate termination points of the some of the waves in the triangle by comparing the current wave to its alternate wave. For example, you might find wave ‘C’ to be 61.8% or 78.6% the length of wave ‘A’. A similar ratio might be realized for wave ‘D’ compared to wave ‘B’ or wave ‘E’ compared to wave ‘C’.

The best way to trade an Elliott Wave triangle is to anticipate the end of wave ‘E’. Sometimes this is easier said than done. To estimate the end of wave ‘E’, use the estimation guideline noted above by measuring the length of wave ‘C’ and finding that level where wave ‘E’ is 61% or 78% of its length.

Also, draw a trend line connecting the wave ‘A’ and wave ‘C’ extremes. Many times, wave ‘E’ draws close and sometimes even overshoots that trend line. Stop loss and risk on the trade is placed at the wave ‘C’ price extreme. 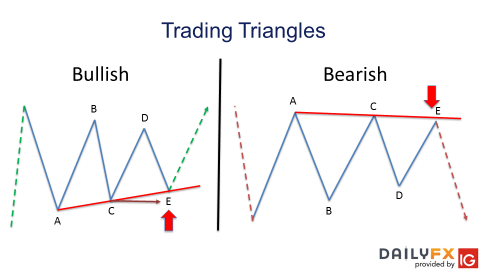 In conclusion, I hope you found this article helpful in improving your understanding of Elliott Wave theory. I use triangles to help uncover the larger wave structure since they only appear in certain points. Additionally, if you devote your time to study Impulse waves and zigzag waves you will find most of the patterns in Elliott Wave Theory have impulses, zigzags, and triangles in them. As a result, you should be able to identify some trading opportunities without much study on the other patterns.

We have other resources to help you further your study on the Elliott Wave patterns and how to trade them. We have a beginner and advanced Elliott Wave trading guides that covers the common patterns.

Jeremy Wagner is a Certified Elliott Wave Analyst with a Master’s designation. You can follow his Elliott Wave analysis via regularly published articles and through his US Opening Bell webinar.

For more in depth study on Elliott wave patterns, we have these on-hour webinar recordings: