The metals such as gold and silver appear to have finished a bullish wave as we forecast a further dip in pricing. USDJPY continues to rally in impulse and dip in corrective waves.

The video above is a recording of a US Opening Bell webinar from March 4, 2019. We focused on the Elliott Wave patterns for key markets such as Gold, Silver, Oil, SP 500, DXY, EURUSD, USDJPY, NZDUSD, AUDUSD and USDZAR.

Gold prices have been steadily climbing higher since the US Dollar turned in mid-August 2018. However, the mood of the gold market appears to have changed as support trend lines are broken with the recent dip in gold prices from the past two weeks.

The February 19 high in gold appears to have completed the fourth wave in a sideways Elliott wave triangle pattern. This implies the fifth and final wave of the triangle is underway. So long as gold prices remain below $1347, we are forecasting gold may dip towards $1190-$1220 to finish the triangle pattern.

The Elliott wave pattern after the dip would call for another strong rally to new highs, but we’ll cross that bridge if we arrive at the lower levels cited. 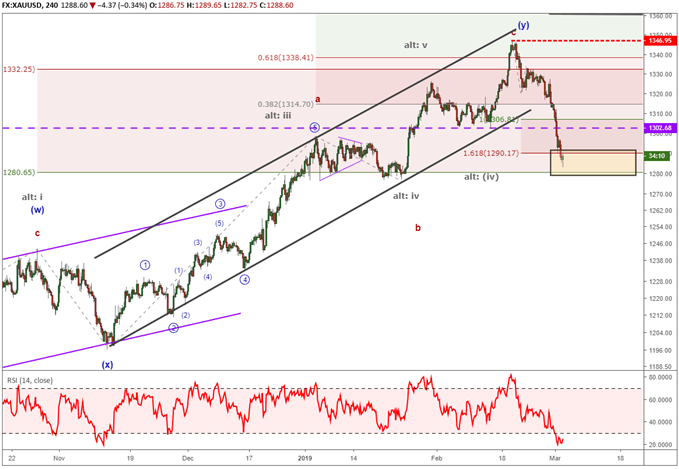 Silver prices completed an Elliott wave impulse pattern from November 2018 to February 20. Of the 8 scenarios that happen after a completed impulse wave, scenarios 1,4,6 apply to this situation. Therefore, the higher probability move is continued weakness in silver prices towards the 61.8% Fibonacci ratio sitting near 14.75. This isn’t an exact price zone and silver doesn’t need to fall that far for the longer term forecast to hold. Once this partial retracement lower exhausts, we are anticipating a rally to begin from lower levels to retest the 16.20 high and possibly higher levels like 17.

We will need to see how the price action develops to the downside as it will be used to help us establish upside targets. 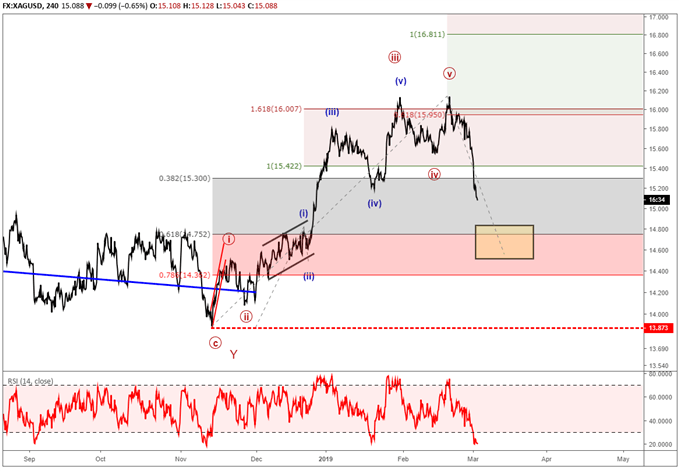 USDJPY extends itself from the January low

After the Japanese Yen flash crash on January 2, we wrote how that outsized price action may have put a period at the end of a three year Elliott wave triangle pattern. If so, then USDJPY may be in the beginning stages of a multi-year rally.

USDJPY continues to advance in motive waves while dipping in corrective waves. This keeps the longer term USDJPY forecast in check as the near term bullish action supports longer term forecast for USDJPY.

We have been tracking NZDUSD since November and the stalled price action is indicative of an Elliott wave triangle pattern. It is difficult to see how advanced this triangle pattern is and where its termination point is estimated to be. Regardless, this has the look of a bullish triangle so we bias our thinking to the up side. 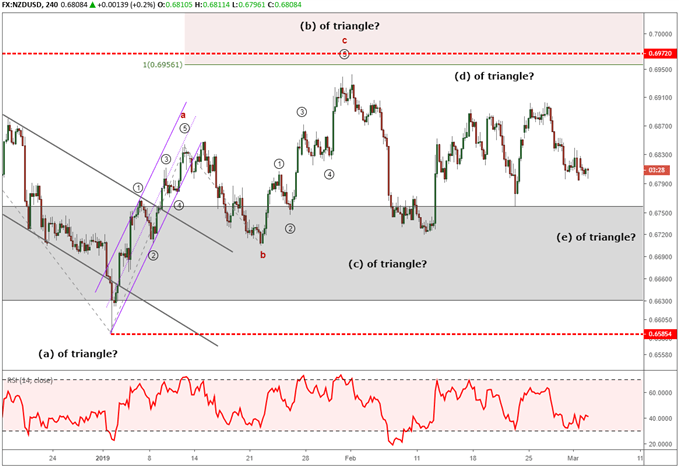