Later today, we have the FOMC announcement at 14:00 GMT time, and while there is no expected move to be made on interest rates, the market will be focused on the Fed’s balance sheet and the tone towards a rate hike in December. You can join Chief Currency Strategist John Kicklighter live for coverage of the FOMC announcement.

The US Dollar Index (DXY) is deep into an area of support, poking just below a long-term support zone running back to 1998. In the vicinity is an underside trend-line extending across swing-lows since May 2015. The downward wedging nature of price action since early August hints at the possibility we may soon see the dollar rebound. 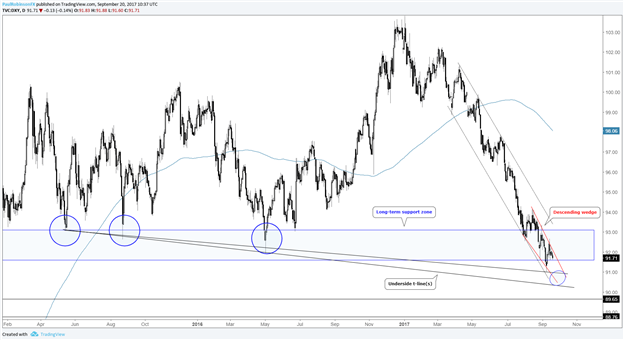 With the euro being ~57% of the DXY it will lead the way. EURUSD is caught between the 2012 lows (where it was rejected twice recently) and support by way of ~11825 and the trend-line rising up since April. A ‘head-and-shoulders’ formation is a possibility with a turn lower from around current levels. On the 4-hr we looked at an ongoing retest of a broken shorter-term trend-line and the possibility that we could see the euro down from here. Today’s outcome could certainly be a maker or breaker of the recent indecision between inflection points. 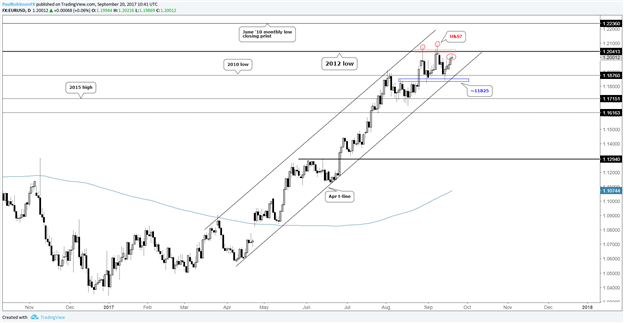 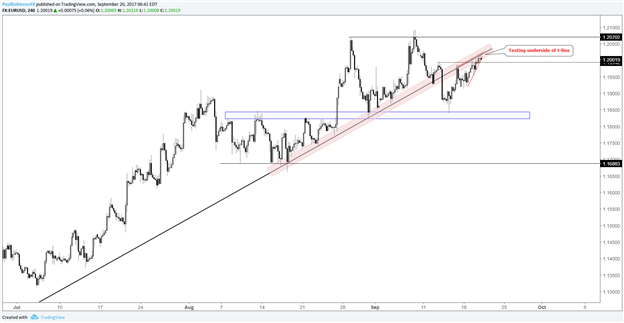 GBPUSD is near the gap from the ‘Brexit’ day vote and the subsequent Monday; it arrives at 13660. We’ll pay attention to how it reacts should we see an assertive test of the gap. Cable is well support by the 13400/500 zone at this time. AUDUSD is caught between long-term resistance extending back to 2015 in the vicinity of 8060/160 and a series of higher lows. It could be in the process of developing an ascending wedge below resistance, which at some point will provide a directional breakout.

EURAUD and EURNZD were a couple of cross-rates we looked at, with the latter having a clean descending wedge forming within the context of an uptrend. It’s possible the end of the pattern arrives at confluence of support around 16160. A top-side break of the wedge will be required to trigger bullish momentum. We also delved into Yen-crosses, with primary focus on GBPJPY, EURJPY, AUDJPY, CHFJPY, and CADJPY. They are at extended levels, but still giving upward momentum the benefit of the doubt.

Gold and silver are bouncing after key channel breaks, but given the recent break it appears these bounces are corrective in nature. Support in gold comes in around 1296 (double-top from April/June). Silver has solid support in the low-17s, and on a turn back lower it will be a threshold which needs to be broken to further along a move towards 16.50.

Global indices, aside from the FTSE, are still postured bullishly. The S&P 500 has resistance in the form of a pair of top-side trend-lines in the 2515/25-area. The DAX is hanging strong after breaking out above the 12300-region and the CAC is also edging higher after a bull-flag breakout. The FTSE is the lone short target here at this time, with it testing the recently broken 7300-area as resistance. It’s a big level, so as long as it stays below then a bearish bias will remain intact.