EUR/USD Caught Between a Rock and a Trend-line; FOMC Looms

In last week’s forecast, we were looking at the possibility of EURUSD putting in a rising wedge on further deterioration in upward momentum at key long-term levels. However, that would have required another attempt this past week to etch out higher prices after a modest pullback. While the pullback to the start the week was modest, it broke what would have been the underside of the wedge and found support around 10825.

We are currently left stuck between solid points of support and resistance. On the top-side we have strong long-term resistance by way of the 2012 low (two reversal days – 8/29 & 9/8 – as evidence of sellers), while on the bottom-side lies the trend-line rising up from April in confluence with support around 10825. On the 4-hr we broke one degree of trend support and retested it on Friday, but the more important line of support is on the daily time-frame.

The trend since earlier in the year is still very much intact, and so we must respect that. But without a surge of buyers it appears it will be difficult to push on through to new levels. If we can get a clean close above recent peaks then our focus will turn towards resistance by way of the June 2010 monthly closing print at 12236. If, however, a break of the April trend-line and 10825-area can develop then we look for a broader decline to unfold. There is always the possibility of a bearish ‘head-and-shoulders’ (H&S) formation, which if it does form will also require a break of neckline support around 11825.

It’s quite possible we are in for a tug of war this coming week between bottom and top side levels before making a clean directional move. The reaction to the FOMC meeting on Wednesday may dictate which way the euro heads for the foreseeable future. 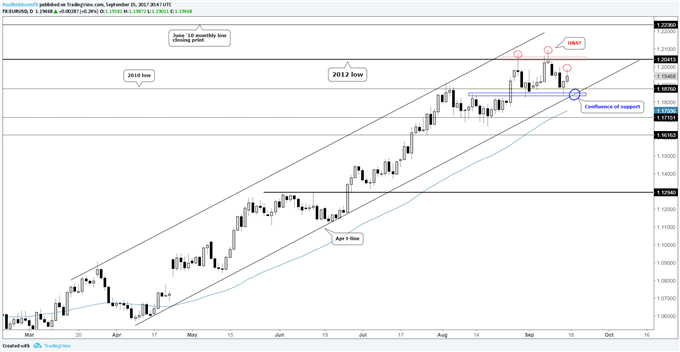 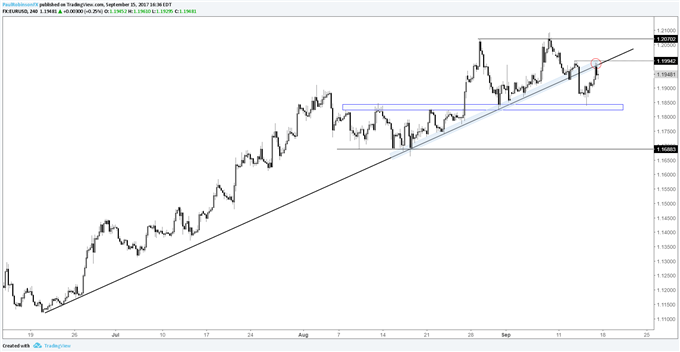