Precious metals were punished yesterday, with both gold and silver prices breaking down through the lower parallel of channels which kept them pointed higher since the July bottom. Since becoming clearly visible in the middle of August, we were using the channel as our guide. Stay within, stay constructive; drop below and a larger down-move could mature.

In last week’s post, we said one possible ‘fly in the ointment’ for higher prices could be the futures positioning in not the silver market so much, but in gold. Large speculators were getting ahead of themselves by adding to their net-long at a very rapid pace. In yesterday’s overview of the most recent COT report, we noted that not only was their additional momentum seen in gold buying, but silver was also seeing the net long position held by large speculators further build towards its largest levels on record. The COT is a big-picture indicator and isn’t the most timely, but can give indication as to when conditions are more prone to seeing rises or declines unfold when price action begins acting in a certain fashion.

Yesterday’s move through the lower parallel was the first time we have seen a strong undercut of support since the two-month-long rally began. There was a small break involved in recent days on a test of the June high, but it has been channel support we’ve been primarily focused on. The strong breach (in gold too) has our attention turned lower, but there is support right here in the low 17s which may provide a bounce before trading lower. There are numerous closes and high prints from August along with the 200-day just above 17. The area right around the current level is also where the not-long-ago broken July 2016 trend-line lies.

From a tactical standpoint: For those looking for a rebound, this is a fairly significant spot to look for one to develop from. But how long it can last is the question, and whether a stalling rally won’t offer the better opportunity for short positions given the channel-break and futures market positioning profile. On further weakness, we’ll look to 16.71, 16.56, and with an aggressive move the 16.09-pivot could come into play. 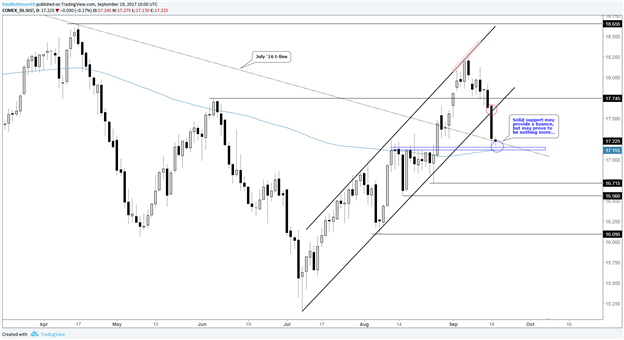 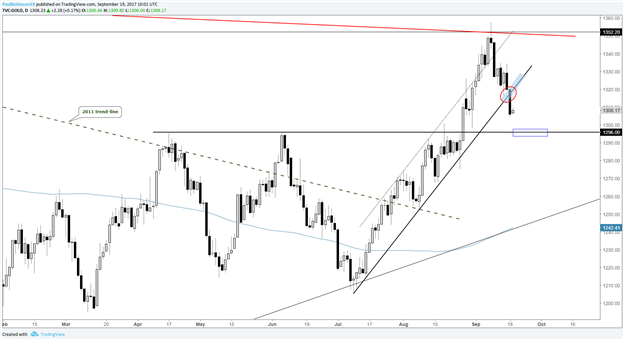