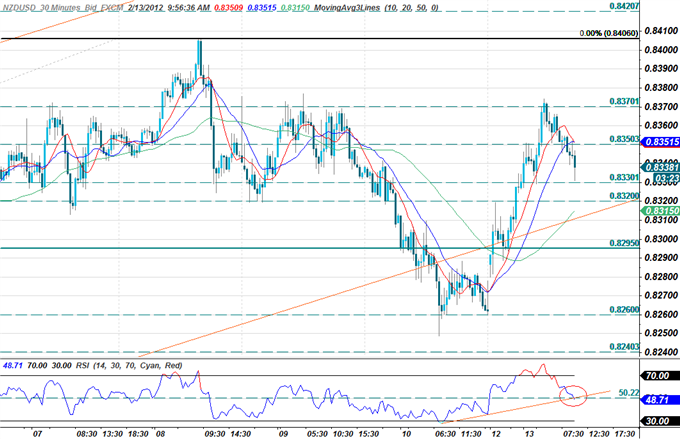 The New Zealand dollar is the top performer against a weaker greenback at the open of North American trade with an advance of 0.86% on the session. Risk sentiment has been wells supported in early trade after Greek lawmakers approved the harsh austerity measures needed to secure the next tranche of bailout funds to the tune of €130 billion. The approval now goes to EU finance ministers who will vote on the reforms on Wednesday. Still, it is uncertain how Greece plans on cutting another €310 million in spending with the country facing some €14 billion in bond redemptions and paybacks.

The kiwi remains well supported on improved risk appetite as traders continue to chase yields. Interim support rests at 0.8330 with a break below former channel support dating back to December 15th at 0.8320 eyeing targets at 0.8295, 0.8260, and 0.8240. Resistance holds at 0.8350 backed by the overnight high at 0.8370 with subsequent ceilings eyed at the 2012-highs put in last Wednesday just above the 0.84-handle. We remain neutral on the kiwi at these levels with intra-day short-scalps taken against the yearly high at the 0.84-figure feasible should RSI break below short-term trendline support. 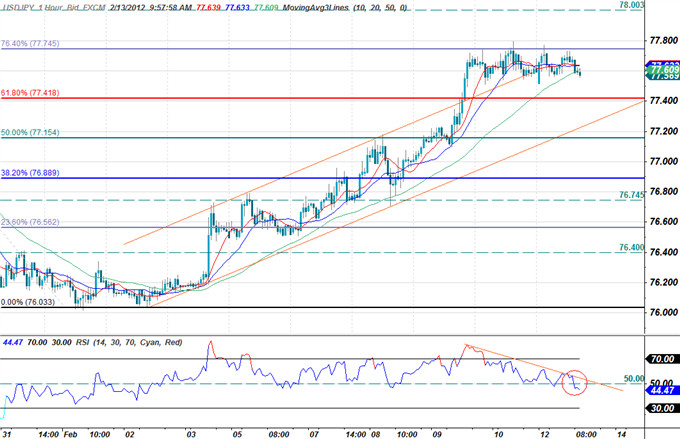 The yen is the weakest performer an hour into US trade with the USD/JPY off by just 0.02% on the session. Weaker than expected GDP data out of Japan overnight continue to suggest a prolonged period of softer growth from the isle-nation with the 4Q annualized GDP coming in at -2.3%, down from 7.0% and missing calls for a read of -1.3%. The yen has come off more considerably against higher yielding currencies such as the kiwi and the aussie as losses against the greenback remain tempered on broad-based dollar selling.

The USD/JPY continues to hold below the 76.4% Fibonacci retracement taken from the January 25th decline at 77.75 with subsequent topside resistance targets seen at the 78-figure, and the January 25th high at 78.27. Interim support rests at the 61.8% retracement at 77.40 backed by 77.15 and the 38.2% retracement at 76.80. Look for the pair to ease throughout the session shouold interim resistance at the 76.4% retracement hold. Moving forward its likely more investors will turn on the yen as Japanese growth prospects diminish. Overnight investors will be eyeing data out of Japan with December industrial production and capacity utilization figures on tap.