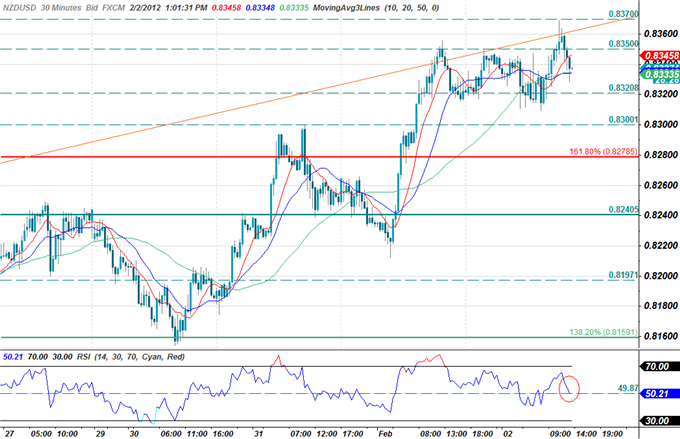 The New Zealand dollar is the top performer against the greenback mid-day in New York with an advance of 0.20% on the session. The kiwi has seen the largest advance against the dollar since the start of 2012 with the pair higher by more than 7.2% year-to-date as risk appetite continues to improve. Traders lent a keen ear to remarks made today by Fed Chairman Ben Bernanke as he testified before the house budget committee. While members of congress cited increased skepticism regarding the Fed’s zero interest rate policy (ZIRP), the chairman remained steadfast in his convictions that inflation expectations remain anchored and that the central bank has the tools available to react to further developments in the domestic economy. Interestingly Bernanke did cite concerns regarding the US deficit noting that if the government does not take steps to address the budget investors may start to lose confidence in the recovery.

The NZD/USD remained well supported nonetheless, with the pair continuing to trade within the confines of an ascending channel formation dating back to December 13th after testing channel resistance in early US trade. Interim support rests at 0.8320, the 0.83-figure, and the 161.8% Fibonacci extension taken from the November 25th and December 14th troughs at 0.8280 with stronger support seen at 0.8240. Should the kiwi remain within its current channel, look for the pair to encounter topside resistance at 0.8350 with subsequent ceilings seen at 0.8370 and the 0.84-handle. Note that the pair is likely to remain within its current range ahead of tomorrow’s key NFP employment report. 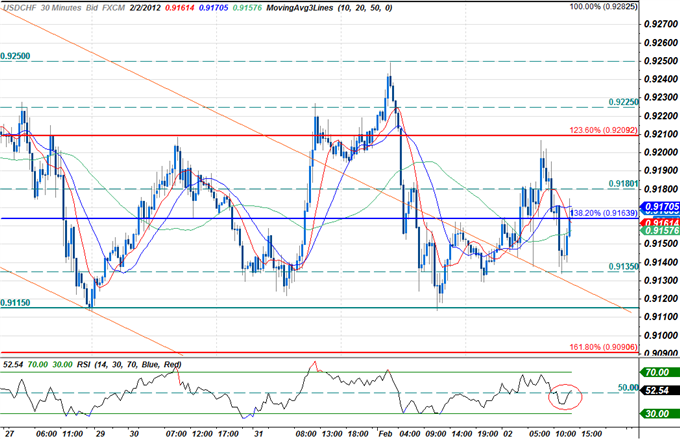 The Swiss franc is the weakest performer in afternoon trade with the USD/CHF higher by 0.21% on the session. Remarks made by interim Swiss National Bank President Thomas Jordon have continued to weigh on the swissie today after he cited that the central bank would is ready to buy currency in “unlimited quantities” to defend the EUR/CHF 1.20 peg and that there should be no doubt with regards to the SNB’s FX capabilities. The warning sent the swissie lower with the franc falling against all its major counterparts in US trade.

The USD/CHF broke back out of the descending channel formation which has held the pair since January 17th before losing steam ahead of the 123.6% Fibonacci extension taken from the December 15th and January 8th crests just above the 0.92-figure. The swissie now rests just below interim resistance at the 138.2% extension at 0.9165 with subsequent topside targets eyed at 0.9180, the 0.91-handle, and 0.9225. Interims support holds at 0.9135 backed by 0.9115 and the key 161.8% extension at 0.9090. Look for the swissie to remain under pressure as the EUR/CHF exchange rate continues to drift lower (currently just above the peg at 1.2050), testing the resolve of SNB officials. The outlook for the USD/CHF remains weighted to the topside as intervention threats are likely to thwart further appreciation of the franc.