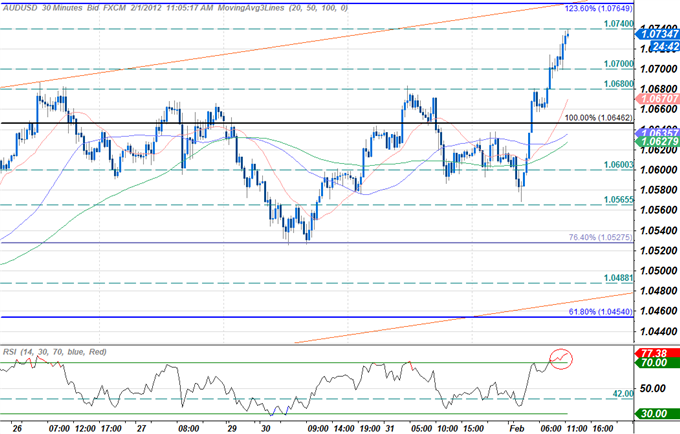 Risk appetite is in full force in early US trade with the high yielding Australian dollar topping the performance charts against the greenback with an advance of nearly 1% on the session. ADP employment data this morning was slightly weaker than expected with the report showing the addition of 170K private sector jobs, missing calls for a print of 182K. January ISM manufacturing also came in a tad softer at 54.1, missing calls for a read of 54.5. Despite the weaker prints, the data showed further expansion in the manufacturing sector with December construction spending topping estimates with a read of 1.5% m/m, up from a previous downwardly revised print of 0.4% m/m. The data coupled with stronger than expected prints on German, Euro-zone, and UK manufacturing PMI with the rally in European equities carrying over into US trade.

The aussie remained well supported in early trade with the AUD/USD making fresh 2012 highs above the 1.07-handle. The pair has continued to trade within the confines of an ascending channel formation dating back to December 19th. Interim resistance is eyed at 1.0740 backed by the convergence of channel resistance and the 123.6% Fibonacci extension taken from the December 19th and November 8th troughs at 1.0765. Interim support holds at the 1.07-figure with subsequent floors seen at 1.0680, the 100% extension at 1.0645, and the 1.06-handle. Look for the rally in risk to taper off over the next 24-hours with a bout of profit taking likely ahead of Friday’s much anticipated non-farm payroll report. 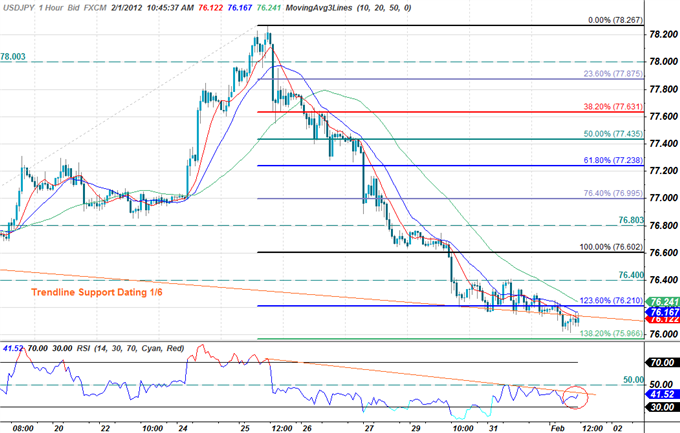 The yen is the weakest performer against an even weaker dollar as risk-on flows saw traders jettison “safety” assets in favor of yields, with the yen falling against all its major counterparts save the greenback. As dollar losses continue to outpace those of the yen, look for the pair to remain under pressure with traders now going on intervention watch as the pair continues to approach pre-intervention levels. Note that the pair is now testing trendline support dating back to January 6th, with a confirmed break here risking further dollar losses.

Advances in the yen are likely to remain tempered however with interim support resting with the 138.2% Fibonacci extension taken from the December 22nd and January 25th crests at the 76-handle backed by 75.80 and the 161.8% extension at 75.60. Topside resistance is eyed at the 123.6% extension at 76.20 with subsequent ceiling seen at 76.40 and the 100% extension at 76.60. Look for the dollar to rebound as we head into February with seasonality trends likely to see risk come off later in the month.