Warning: plot twist ahead. Markets were widely expecting a dovish Governor Mark Carney today when the Bank of England released its Quarterly Inflation Report (QIR), but that was far from the case.

True, the BoE implemented a more detailed version of its forward guidance policy, tethering its key interest rate (currently at 0.50% where it has been since March 2009) to the Unemployment Rate (7.0%, now at 7.8%), a move akin to what the Federal Reserve has done in recent months.

Beyond the promise of low rates through mid-2016, the QIR was much less dovish than anticipated and the forward guidance strategy turned out to have a rather hawkish backdrop. The positivity – and change in my tune – comes from the BoE’s revision to the growth forecast, improved to +1.5% from +1.2% for 2013, and to +2.7% from +1.9% for 2014.

Certainly, the recent uptick in British economic data aligns with optimism from the BoE, but the real kicker – and what I believe to be the main underlying reason for extravagant British Pound strength this morning – is the inflation ‘circuit breaker.’ Governor Carney noted that if inflation is at 2.5% in 18- to 24-months, the forward guidance strategy – to keep the main interest rate at 0.50% into the 3Q’16 – would be invalidated.

Thus, with headline inflation at +2.9% y/y currently, the British economy has technically breached the circuit breaker level already. Moreover, the BoE has consistently underestimated inflation (so its forecast for slowing inflation has been taken with a grain of salt), leading market participants to believe that the 2.5% circuit breaker threshold will be easily breached.

In a sense, the market may be reacting as if the BoE just outlined its exit strategy, even as Governor Carney said that the central bank stood ready to implement more QE. As long as data stays on its recent upswing, it’s hard to believe that more QE is coming; and today’s QIR is certainly optimistic for the Sterling. 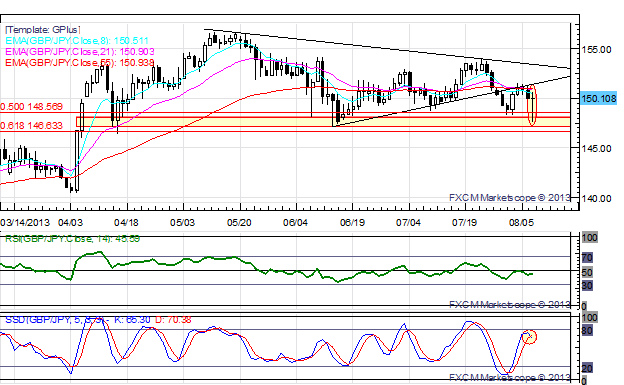 GBPJPY – From the April low to the May high, the pair has found support consistently in the ¥147.15/8.15 zone, with the 50% Fib retracement at 148.57 and the 61.8% Fib retracement at 146.63 serving as important support as well. Today’s reactionary selloff on the BoE headlines saw the pair trade down into this key zone and rebound sharply. Gains may be tempered with the Bank of Japan set to meet and keep its policy on hold, while technically speaking, a major top may be in now that the Symmetrical Triangle from May to July has broken lower. Bearishness would be invalidated above 151.60.