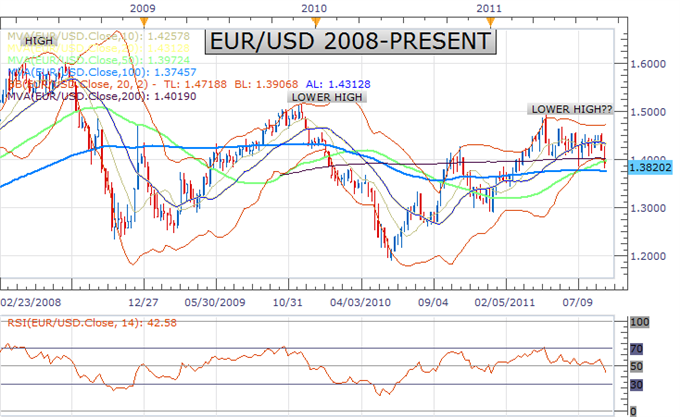 Most of the market reaction over the past several hours has been in response to the fallout from the European Central Bank rate decision in which President Trichet outlined a more intensified fear of the Eurozone economy and the need for the central bank to keep things on the accommodative side. One of the key take aways from Mr. Trichet and company was that inflation risks were balanced and no longer to the upside. The language clearly added weight on the Euro with the market dropping sharply in response, and paving the way for a good deal of negative sentiment into Friday. Talk of global monetary accommodation in the face of a struggling macro economy gained traction as market participants speculated of the possibility for some form of coordinated stimulus at the upcoming G7 meeting.

Relative Performance Versus the USD on Friday (as of 15:00GMT)

Technically, today’s break back below the 1.3835 July low is significant with the market now potentially carving out a key lower top that exposes additional declines all the way back down towards the 1.2000 area over the coming weeks and months. A closer look at the longer-term Euro chart since the 2008 record highs shows the market moving in a downtrend and potentially on the verge of carving out the next major lower top. The rapid deterioration in the Eurozone supports this outlook on the fundamental front, and we contend that any attempts to offer some form of a soft landing in the region will still prove to be a tough task as the local markets are forced to battle far too many demons which include; bailouts on the peripheral, record widening bond spreads, a troubled banking sector, political turmoil, and threat of downgrade.

On the strategy front, we continue to recommend looking for opportunities to build into long US Dollar positions. The current market environment is definitively risk averse and should only continue to promote additional safe haven buying. With the Swiss Franc no longer a viable option and the Yen hardly being classified as risk free, we see the US Dollar emerging as the prime beneficiary of these flows in the currency markets. There have been those that have distorted perceptions of safe haven alternatives by shifting into higher yielding and emerging market plays, but we feel this strategy will soon prove to be quite painful as themes of instability and uncertainty eventually expose these markets for what they really are……risk correlated assets that will fall victim to liquidation on a further decline in the global economy. The idea of hiding in the Australian Dollar is one such example where the lure of yield will likely be severely offset on the reality that the deluge of global economic and financial market deterioration will soon initiate a third phase and extend from Europe into the Asian and emerging markets. 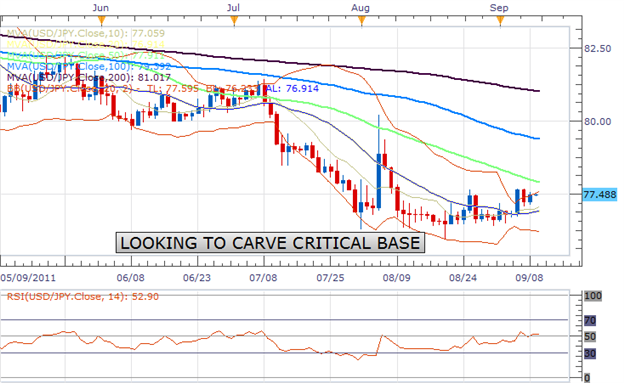 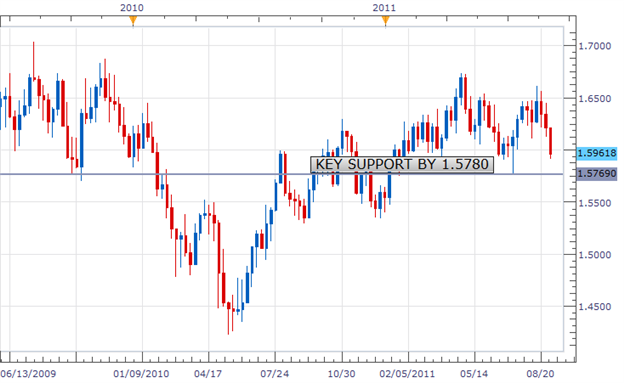 GBP/USD: Overall price action seems to suggest that this market could once again be looking to roll over in favor of some fresh medium-term declines. Any gains in recent months have proven to be very well capped above 1.6500, and this latest break back below 1.6000 opens the door for a pick-up in bearish momentum. Next key support comes in by 1.5780 and a break below the level will confirm bias and accelerate declines for a retest of 1.5345 further down. Any interday rallies are expected to be well capped below 1.6300, while ultimately, only back above 1.6500 would give reason for concern. 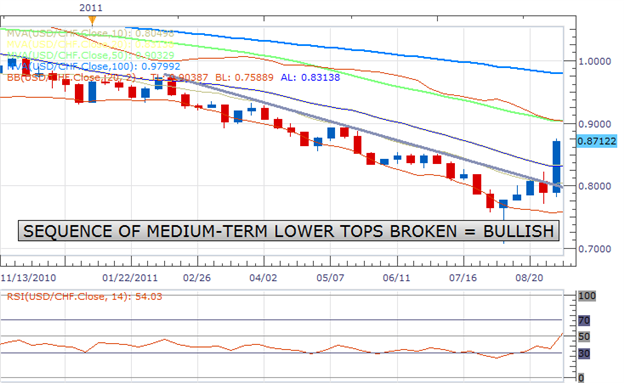 USD/CHF: The latest sharp reversal off of record lows just shy of 0.7000 is encouraging and could finally be starting to signal the formation for a major base with a sequence of medium-term lower tops broken. A recent acceleration of gains beyond critical resistance and a previous lower top at 0.8550 confirms bullish bias and from here, we see room for fresh upside towards the 0.9000-0.9500 area over the coming weeks. Look for any setbacks to be well supported above previous resistance now tuned support at 0.8240 on a daily close basis, while ultimately, only back under 0.7700 would negate bullish outlook and give reason for pause. The break and close back above the 200-Day SMA for the first time in several months provides more ammunition for our highly constructive outlook.