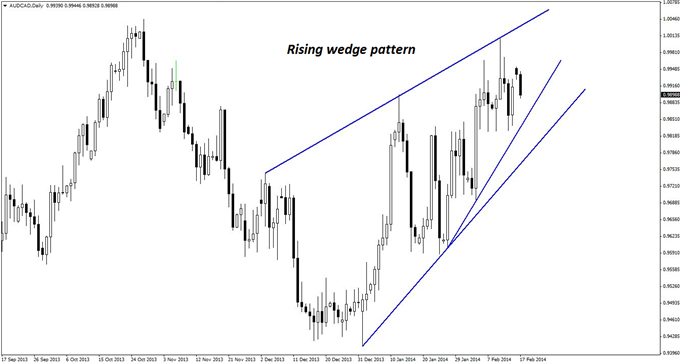 Popular AUD/CAD Pattern That May Not Work This Time

Head-and-shoulders patterns tend to generate a lot of excitement among traders. However, there are a few factors that can cause these popular patterns to fail, especially if they are entered too quickly. AUDCAD is currently exhibiting one potential example of this situation.

As shown below, the rising wedge pattern on the AUDCAD daily chart signals a rather weak uptrend in the bigger picture, but it has not yet shown any of the usual wedge pattern breakdown signals. The most telling signal would be a quick move beyond the upper wedge resistance before breaking back in again swiftly. Since it has done no such thing, this pattern can be traded using traditional support and resistance principles instead.

The head-and-shoulders pattern on the below AUDCAD four-hour chart will become obvious once the neckline denoted by the black horizontal line has been drawn. However, less-experienced traders might easily miss the fact that this pattern will have to punch through at least three levels of rising support in order to achieve its goal. In addition, this goes against the dominant trend on the daily chart. 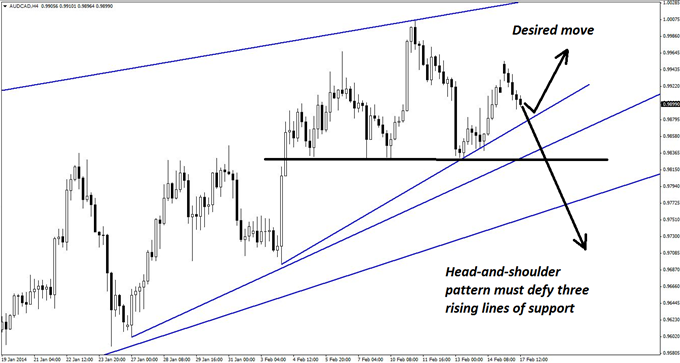 This is not impossible, of course. However, a far more likely short-term development would be a bounce off one of these rising lines of support, which is why today's trade is to the long side.

The hourly chart below clearly provides a reasonable support zone for initiating new longs. The exact zone comes in at 0.9849-0.9882. 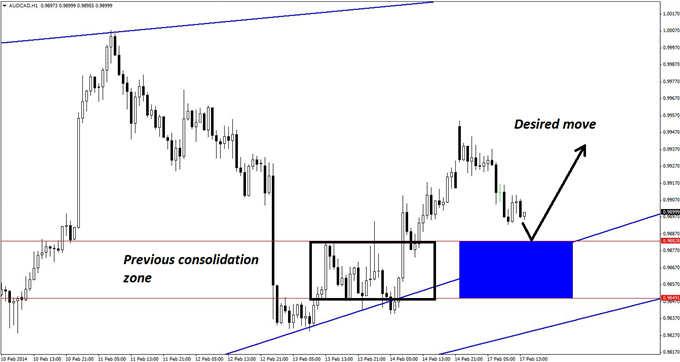 This risk zone is a mere 33 pips deep, as compared to the 60-100 pips that even a conservative move to retest the recent highs would supply.

Nonetheless, in order to achieve greater precision with this trade entry, the 15-minute time frame (chart not shown) is preferred. Viable triggers would include the usual suspects, including bullish reversal divergence, pin bars, and/or bullish engulfing patterns on the 15-minute chart.

Dropping down to the lower time frame should provide even narrower risk, however, traders should be willing to take two or three tries to get in on this move. Although this is essentially an intraday trade, part of the position can be scaled out and the remainder left to ride what could be a worthwhile move amid acceptable risk.