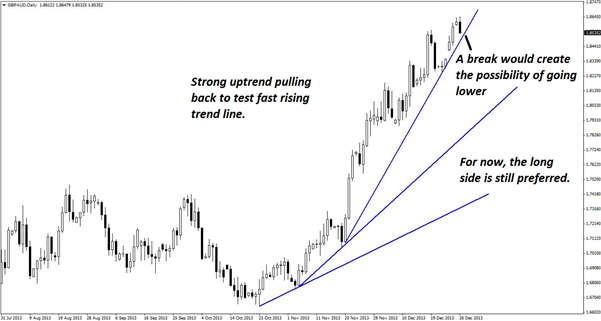 A Chance to Enter a Raging GBP/AUD Uptrend

Many of the important FX crosses haven’t been showing reasonable entry points of late, particularly because some have been very strongly trending. However, GBPAUD is pulling back just slightly after a strong two-month trending period, and despite how late in the move it is, there may be a chance to enter on the lower time frames.

Even a brief study of the daily chart below would tell traders that the trend is up, and the best risk/reward set-ups are typically found in long trades.

There are, however, several arguments for the short side as well:

As a result, the trade should be taken initially as a scalp on the lower time frames using relatively tight entries and defensive trade management. However, there’s always the possibility of this developing into a longer-term swing trade in due time. 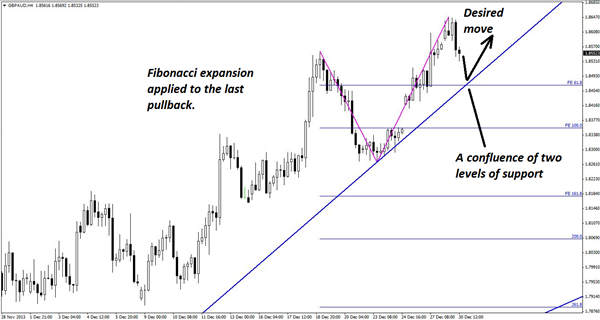 If the trend line breaks, then the 100% Fibonacci expansion level will come into play, but in that scenario, an analysis of the breakout would be necessary.

The hourly chart below actually gives some cause for concern, as the pullback is displaying five-wave Elliott-type characteristics. For Elliott Wave enthusiasts, wave 4 has been chosen because it respects the "rule of alternation," which implies that since wave 2 in this case was deep, wave 4 is often shallow. It is not an Elliott “law,” but it is often true. Nonetheless, this suggests that if the current move is a wave 5, price may turn before even reaching the trend line. 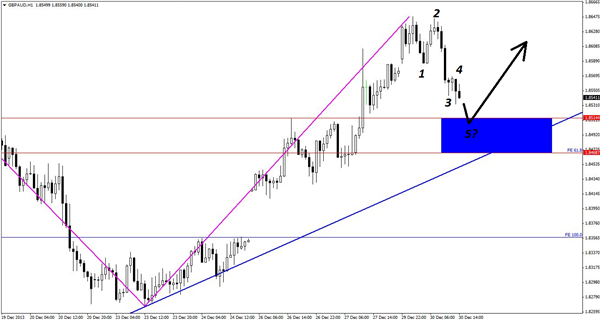 The support zone has been determined using previous resistance to estimate the higher portion of the zone, and when combined with the Fibonacci expansion level, the zone of interest is 1.8468-1.8514.

This trade should be initially taken as a scalp trade on the 15-minute chart (not shown), entering on either bullish reversal divergence, bullish engulfing patterns, or ideally, pin bars.

As always, traders should be prepared to take two or three attempts at entering this trade, and it should be managed using multiple positions so that part can be scalped out quickly at the first sign of trouble. In that scenario, the remainder could be left to develop into a potential swing trade.