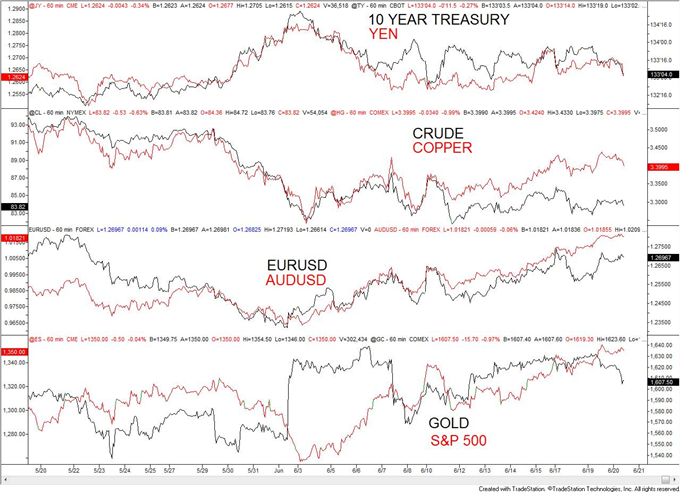 USDJPY Bullish Base and Breakout Potential ahead of Bernanke 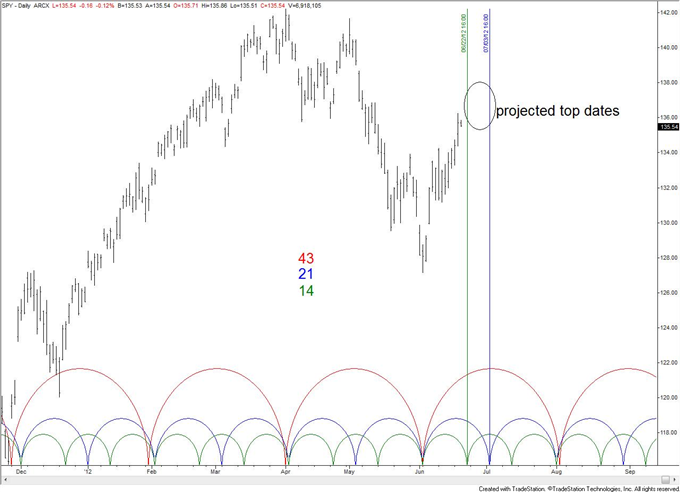 We are just 2 days away from the beginning of our projected topping window. “The decline from the April high consumed 43 days…corrective rallies tend to consume 1/3 – 1/2 of the time that the decline did. In other words, one would expect the rally from the low to take roughly 14 to 21 days. Projected from the 6/4 low, we get possible topping dates on 6/22 and 7/3.” 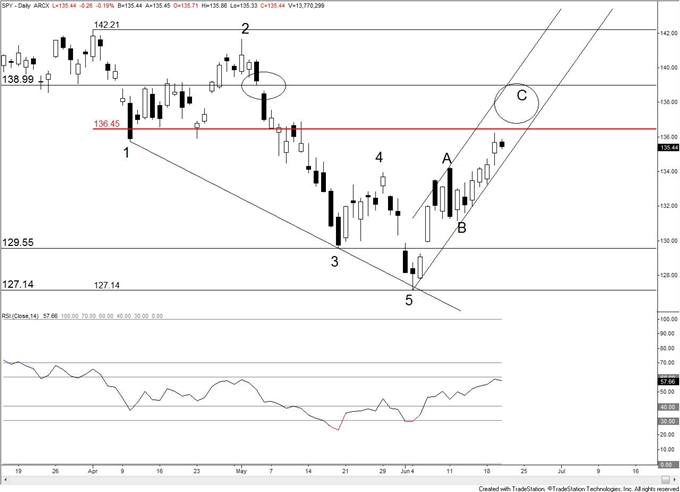 The rally from the low in SPY has retraced nearly 61.8% of the decline from the April top. At this point, keep an eye on the channel that defines the advance from the 6/4 low for support and resistance. A drop below Monday’s low at 133.28 would suggest that the top is in place. Until then, respect upside potential towards the gap left open in early May as high as 138.99 (intersects channel resistance tomorrow). It’s worth noting that RSI is pressing against 60, which often serves as resistance in a bear trend. The DJIA and S&P 500 Index have already reached their 61.8% retracements. A look at the intraday patterns reveals potential for weakness in wave 4 of C before a final thrust higher (see next chart). 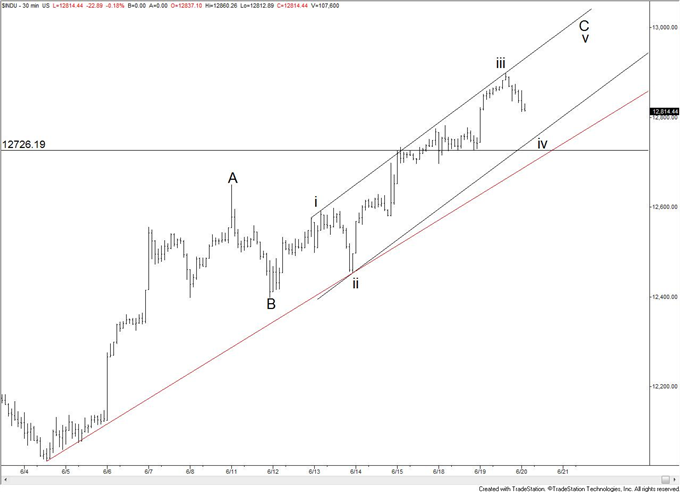 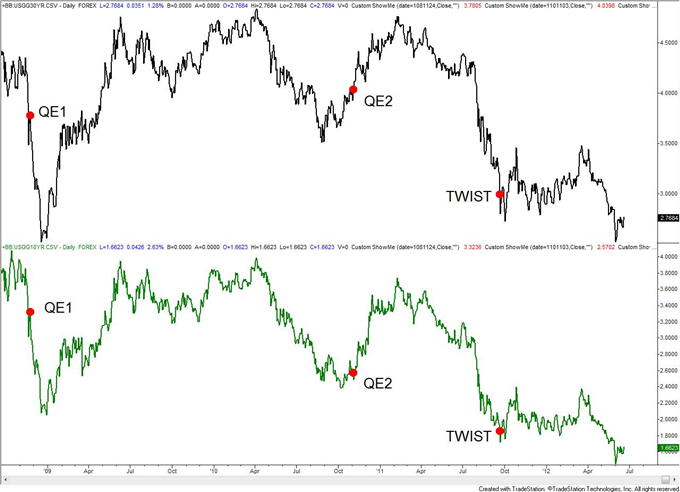 The financial world is of course focused on whether or NOT helicopter Ben will announce QE 3. The goal of QE programs is to provide liquidity to financial markets. Whether or not QE is successful depends on whether or not the public’s mood, as evidenced by the market’s position in its larger pattern, accepts it. An effect of providing liquidity (QE) is an increase in asset prices, including bonds, and therefore a decrease in yields. QE1 occurred in the middle of a flight to treasuries and yields had already been falling sharply for months. Yields bottomed a month later, reversed, and within 5 months were above their pre-QE levels. Yields were just off of their lows when QE2 was announced. The exact opposite of what the Fed wanted occurred after the QE2 announcement…yields increased for 3 months before reversing.

The goal of operation twist is to manipulate the yield curve, and notably to push down longer term yields. The 30 and 10 year yields went sideways to higher for 6 months after the announcement of twist.

There is reason to be skeptical about the Fed’s influence on markets. Sure, kneejerk reactions are to be expected but you’ll probably be on the wrong side of the market if you blindly follow the Fed. 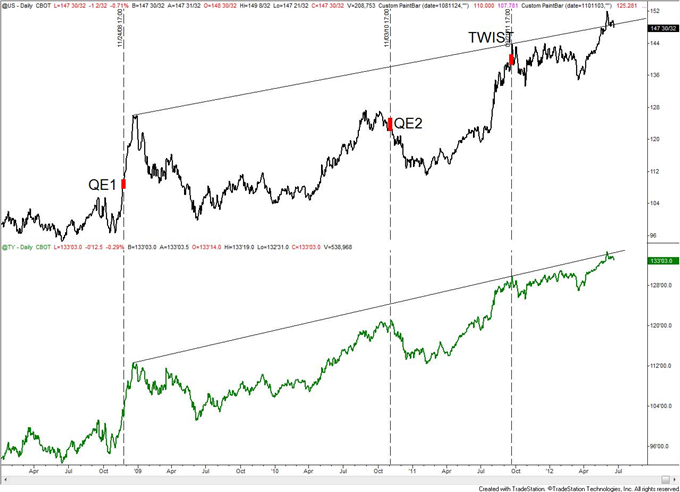 The treasury market looks quite ‘toppy’, which supports USDJPY longs. 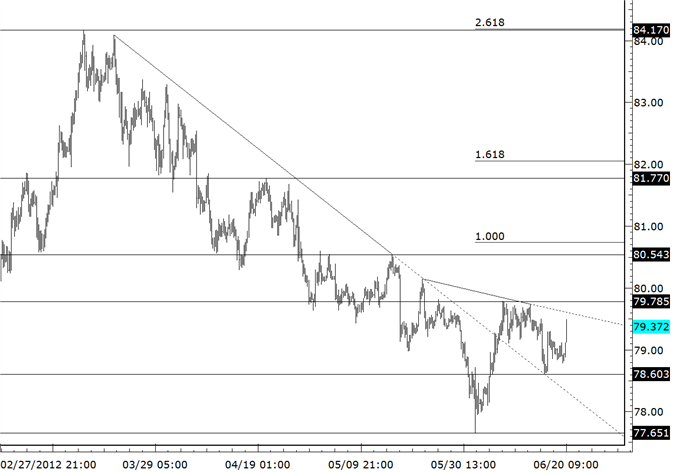 The divergence between yields and the USDJPY (new record low in yields but not in USDJPY) has been covered extensively in recent weeks as has the bullish technical condition of the USDJPY by itself. A solid base seems to have formed since mid-May, the low for the month is on the first of the month, and former trendline resistance acted as support last Friday. In the event of a QE3 negative reaction, I would look for 7850 to hold as support but I am bullish USDJPY against 7765.