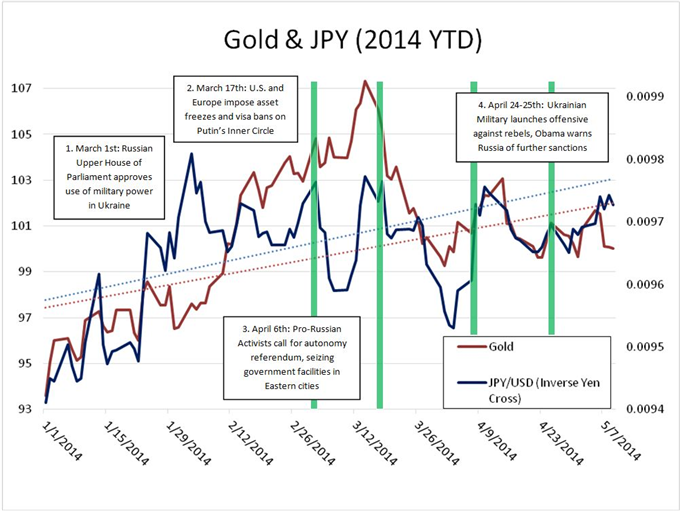 Both Gold and the Japanese Yen – both considered to be safe havens for the financial market – have rallied considerably over the past several months as the Ukraine Crisis continues to smolder. Over the past year, the dissolution of the Ukrainian Government has devolved into a tense standoff between Russia and the European and US-led West not experienced since the end of the Cold War over three decades ago. Critical decisions concerning the future of the Ukrainian state and its regions are set to unfold over the next several weeks, the outcomes of which could have significant implications for global sentiment. With building political anxiety and increasingly burdensome economic sanctions imposed by both parties, risk appetite has been uncharacteristically knocked off pace with a notable curb on risk benchmarks like the S&P 500 and slow recovery of safe haven assets like the Japanese currency and gold.

Following the dissolution of the previous government and the Crimea region’s vote to join the Russian Federation, the situation continues to feed rankle. This weekend, Pro-Russian activists in the Donetsk region of the country are expected to hold a referendum for autonomy (set for May 11th, 2014) in spite of Russian President Putin’s urges to delay and engage in negotiations. Additionally, elections for the new President of Ukraine are set to take place on May 25th, the legitimacy of which will likely be held in contention by dissenters. International loyalties between these feuding parties materially escalates this situation to an Emerging Market and global growth issue. Since the beginning of Russia’s involvement in Crimea, Russian stocks have plummeted and warnings of recessions have been sounded. At the same time, economic sanctions imposed by the West have proved particularly burdensome on the Euro-Zone, whom are still largely dependent on Russia for energy, particularly natural gas.

Global Equity indexes have oscillated alongside developments in Ukraine as the capital markets adapt to increasingly volatile economic and political conditions. Should the Ukrainian state continue to lose regions to contested votes for independence, economic and financial sanctions will likely keep growing. In turn, the disruption in growth and speculative appetite will be further pinched by this important BRIC nation. Perhaps already looking for a reason to unwind risk, investors will watch benchmark equity indexes the world over (like those below) for signs of fear and flight to safety. 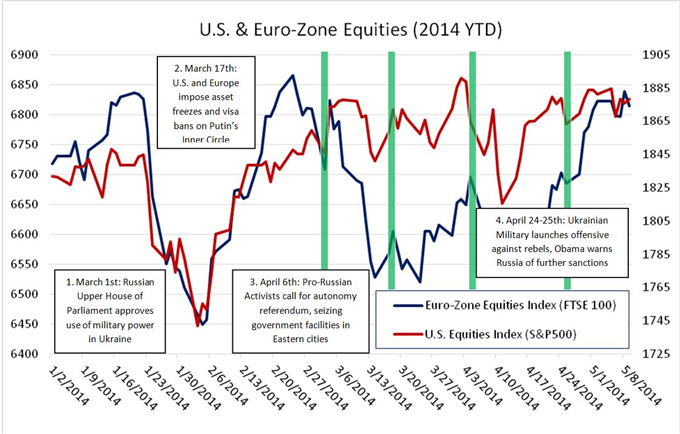 Another element to watch for in this drama is the changing position of energy players. A growing surplus of natural gas and light sweet crude oil in the U.S could lead the country to become an important energy provider should the White House choose to loosen energy restrictions – which could add a further demand for the greenback. Long standing bans on the export of fossil fuels in the United States coupled with increased domestic fracking has led to a falling trade deficit and what some are speculating is a glut in natural gas and crude oil. Should the U.S. open its energy market to the Euro-Zone, it could stimulate a rally on the USD.