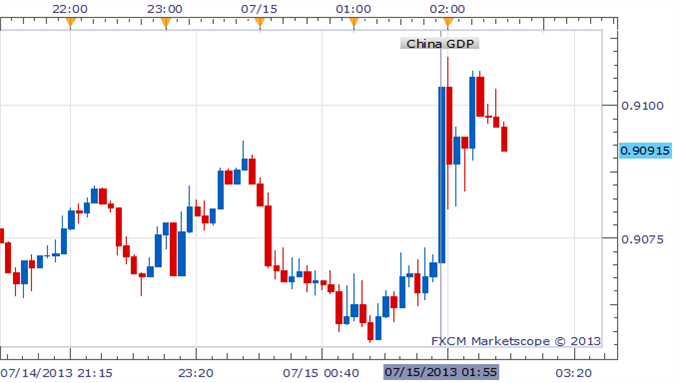 The Australian Dollar traded higher against the US Dollar after Chinese economic growth in June printed in line with economists’ expectations. China’s GDP grew 7.5 percent year-over-year in the second quarter compared with 7.7 percent in the prior period. The result marks the slowest GDP growth since the second quarter of 2009, underscoring recently widespread concerns about a slowdown in the world’s second-largest economy.

Other data released along with the GDP figure showed pointed to slower industrial production and capital investment but revealed signs of strength in retail activity. Industrial output grew 8.9 percent year-over-year in June compared, a slowdown from the 9.2 percent increase in May. Urban fixed-asset investment rose 20.1 percent over the same period versus 20.4 percent previously. Impressively, retailers’ receipts added 13.3 percent, beating forecasts calling for a 12.9 percent gain.

The Aussie traded higher against its US namesake ahead of the official announcement at 2:00 GMT after China Securities Journal claiming confirmation of the 7.5 percent outcome emerged on the wires. The response likely amounts to a relief rally considering the as-expected print did not serve to materially advance the case for further RBA interest rate cuts (as a disappointing print might have). From here, investors will be focused on the publication of minutes from this month’s RBA meeting, due to cross the wires tomorrow at 1:30 GMT.