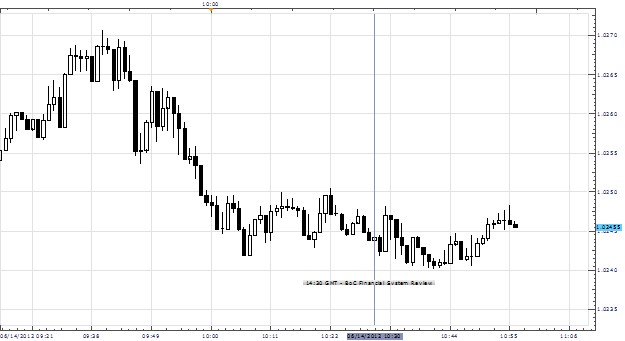 In its semi-annual Financial System Review released today, the Bank of Canada (BoC) cited continued robustness of Canada’s financial system and relative stability in domestic credit markets despite the fragile global environment. However, the Bank warned of high dangers to the Canadian economy if the European sovereign debt crisis worsens, emphasizing that worsening conditions in the euro zone could cause “major shock” to Canada.

The sources of major risks to the stability of Canada’s financial system remain broadly the same as those reported in the December 2011 Review, as outlined below:

The Bank stated that mitigation of risks to the global financial system requires a number of policy actions, with containment measures in the euro area at the forefront of priorities. Mitigation measures abroad include adequately capitalizing euro-area banks, reinforcing financial firewalls, enforcement of structural and product market reforms, and a clearer path for risk mutualization within the European monetary union. Globally, current account imbalances must be addressed to help foster sustainable and balanced global economic growth.

Domestically, “the high indebtedness of the household sector and elevated valuations in the housing market require continued vigilance”. In regards to broader financial reform, Canadian banks plan to implement Basel III capital rules as a key priority, which will help build a resilient market infrastructure in future.

The loonie remained largely unchanged against the greenback, as few developments have come out since the Bank’s December 2011 Review. At the time of this report, the USDCAD pair was trading at C$1.0246 to the dollar.