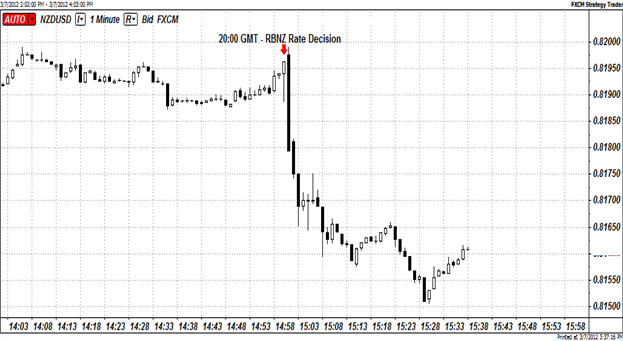 The Reserve Bank of New Zealand announced its decision today to leave the Official Cash Rate (OCR) at its record low level of 2.50 percent, which has been unchanged since March when it was cut by 50 basis points from 3.00 percent. The rate decision was unsurprising, as all sixteen economists polled in a Bloomberg News survey had expected no change in the rate.

In the RBNZ’s monetary policy statement and subsequent news conference, Reserve Bank Governor Alan Bollard noted that the ‘domestic economy is showing signs of recovery’, boosted by a pickup in household spending and building activity over the past few months. Furthermore, high export commodity prices as well as rebuilding efforts from the Christchurch earthquake are expected to spur a more robust recovery, in spite of ongoing risks to the global outlook. Inflation had settled ‘near the middle of the Bank’s target range’ and inflation expectations had fallen, with Bollard stating that the rate of 2.5 percent could remain in place for much of 2012. Based on its medium-term outlook for inflation, the RBNZ decided that no policy change was warranted.

Although the appreciation of the N.Z. dollar has helped contain inflation, Bollard highlighted the RBNZ’s concerns that its high value is ‘detrimental to the tradable sector, undermines GDP growth and inhibits rebalancing in the New Zealand economy’, and is likely to negatively impact on the manufacturing and tourism sectors. The RBNZ lowered its March 2012 annual GDP growth forecast to 1.8 percent while raising its GDP growth forecast for March 2013 to 3.1 percent.

Looking ahead, the RBNZ is unlikely to raise its OCR at its next rate decision if the kiwi remains at its current elevated levels, with Bollard concluding that ‘sustained strength in the New Zealand dollar would reduce the need for future increases in the OCR’.

Following the RBNZ’s rate decision announcement, the kiwi plummeted against the U.S. dollar, shedding 46 pips to trade lower at around 0.8150. Although the rate decisionwas in line with expectations, the market looked for indications of a policy change in the near-term. The kiwi weakened as Bollard’s somewhat cautious tone and conclusion that a rate hike is unlikely if the strength of the N.Z. dollar continued dampened the market’s outlook for a rate hike in the near future.