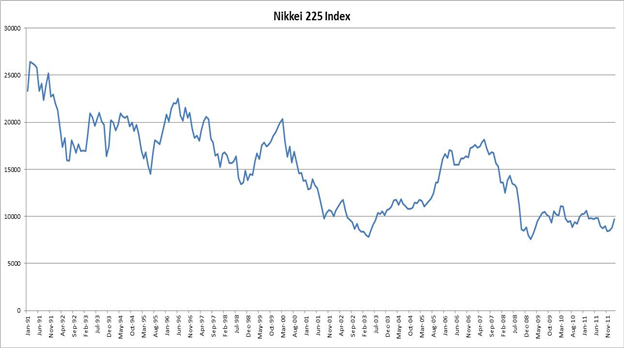 Japan’s Nikkei index rallied in February to its seven-month closing high, surpassing the key sentiment level of 9,500. The benchmark Nikkei soared 10.4 percent in February, marking the best February performance since 1991. Among the best performing sectors were exporters such as autos, auto parts and technology firms as well as maritime transport and financials.

Global equities have been bolstered by a run of strong U.S. economic data, liquidity injection of nearly half a trillion euro late last year by the European Central Bank (ECB) and further monetary easing by the Bank of Japan (BOJ) and the Bank of England (BOE). In a surprise move, the BOJ expanded its asset buying program by ten trillion yen on February 14, sinking the Japanese yen to a three month low against the U.S. dollar. The depreciating yen has lifted the appeal of Japanese exports and exporters’ shares, which has further boosted the Nikkei’s bullish run.

With the Nikkei index now trading at around 9720 and the Nikkei deep in ‘overbought’ territory with the 14-day relative strength index at 82, we expect investors to shift their focus to the FX market to capitalize on the depreciating yen and improving export markets. In line with stronger risk appetite and rising market confidence, we are likely to see investors going short on the Japanese yen against higher-yielding commodity-based currencies such as the Australian dollar and N.Z. dollar to benefit from the spread in interest yields.