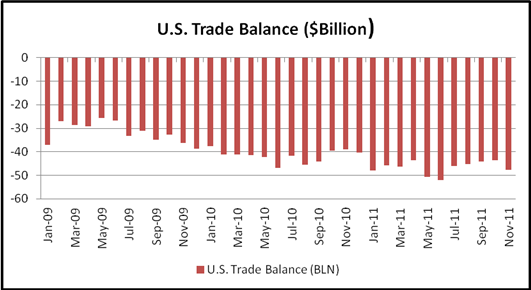 The report issued by the Commerce Department today showed that trade deficit unexpectedly rose 10.4 percent to $47.8 billion in November, the highest level in five months. The print missed consensus forecast of $45.0 billion, according to the Bloomberg survey. October deficit was revised lower to $43.3 billion from $43.5 billion initially reported.

The U.S. trade gap widens sharply in November as import significantly rose while exports fell. Specifically, imports climbed 1.3 percent to $189.7 billion as a result of increases in industrial supplies and materials, automotive vehicles, parts and engines purchases from overseas. Meanwhile, exports fell 0.9 percent to $177.8 billion. Exports declined for the second straight month as U.S. manufacturers sold less industrial supplies and materials, capital goods, automotive vehicles, parts and engines, foods, feeds and beverage purchases to international market. Regarding to geographic area, good deficits with Canada widened from $2.2 billion in October to $3.0 billion in November while deficits with Europe increased to $9.7 billion from $8.0 billion. In contrast, deficits with China declined from $28.1 billion in October to $26.9 billion in November. 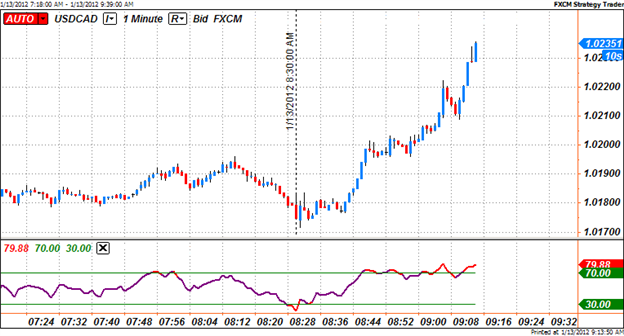 The U.S. dollar gains ground versus most of its major trading partners following the U.S. trade balance report. The greenback strengthens 0.95 percent against the euro, appreciates 0.9 percent against the Swiss franc and climbs 0.48 percent versus the Canadian dollar. As can be seen from the 1-minute USD/CAD chart above, the currency pair rapidly jumped 60 pips from 1.0175 to 1.0235 within forty-five minutes. The Relative Strength Indicator (RSI) rising above 70-level, overbought territory, indicated that foreign exchange crowd were aggressively purchases greenback. At the time this report was written, one dollar trades at C$1.0235.

Safe-haven currencies, including the U.S. dollar and Japanese Yen, surged ahead North American trading session today as market sentiments plummeted amid rumors from Dow Jones Newswires that a downgrade of France is “imminent”. It’ became clear that any headlines about the prolonged and intensive sovereign crisis in the Eurozone could trigger a big volatility in the foreign exchange market.