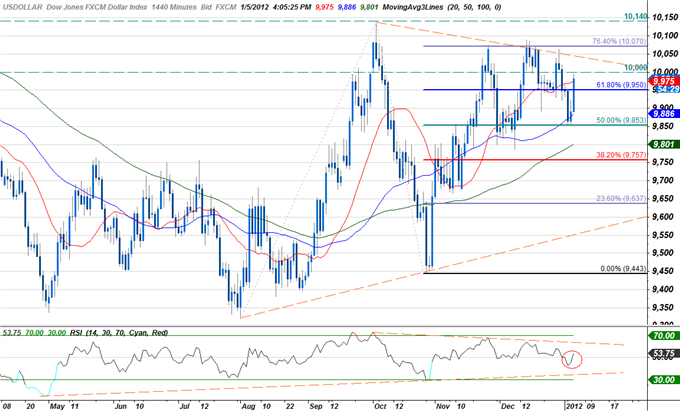 The greenback is markedly higher at the close of North American trade with the Dow Jones FXCM Dollar Index (Ticker: USDollar) advancing 0.92% on the session. The gains come on the back of another lackluster performance in US equities which spent much of the session struggling to pare early losses carried over from a more substantial sell-off in European markets. Helping support stocks was a much stronger than expected print on the ADP employment report which showed the US created 325K jobs in December. The data nearly doubled consensus estimates which had called for a print of just 178K. By the close of trade, the S&P and the NASDAQ were higher by 0.29% and 0.81% respectively, while the Dow was slightly weaker, off by just 0.02% on the session.

The dollar pulled further away from the key Fibonacci support level we have continued to cite since the start of the year at 9850. The index breached the 61.8% Fibonacci extension taken from the August 1st and October 27th troughs at 9950 before losing steam just ahead of the psychological 10,000 level. The RSI reversal noted yesterday has continued to support our bias with the oscillator crossing back above the 50-level as the slope steepens further. 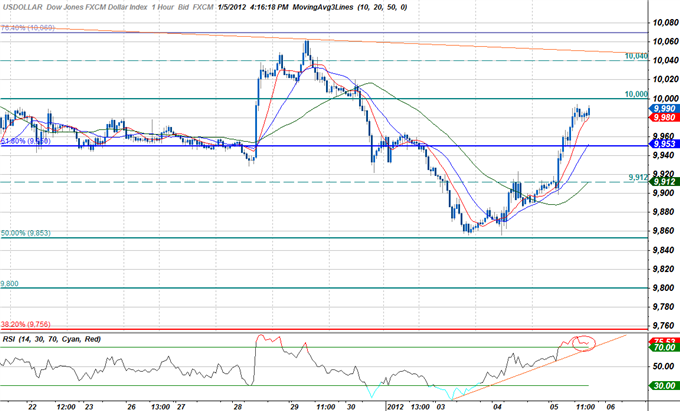 An hourly chart shows the index struggling to test the 10,000 level just ahead of the close in New York. A breach here eyes subsequent resistance targets at 10,040 and the 76.4% Fibonacci extension at 10,070. The level has continued to provide strong resistance for the reserve currency with the index failing four breach attempts late last year. Interim support now rests at the 61.8% extension at 9950 backed by 9912 and the 50% extension at 9850.

The greenback advanced against all four component currencies highlighted by a 1.16% advance against the euro which moved nearly 147% of its daily average true range. Reports out of Europe continue to suggest that the Germans remain steadfast in the opposition to the expansion of the bail-out fund with yields on French debt continuing to rise despite decent demand at a bond auction earlier today. The euro fell to its lowest levels since September 2010 as ongoing concerns about the deepening debt crisis weighed on demand for the single currency. It comes as no surprise that the Japanese yen once again is the top performer of the lot although dollar advances continue to outpace those of the low yielder. The yen did appreciate against all its other major counter parts as it continues to benefit from haven demand during risk-off environments. Having said that, advances against the greenback will remain tempered on concerns over further currency intervention form Japanese officials.

Tomorrow’s economic calendar carries significant event risk with the non-farm payroll report and the unemployment rate highlighting the docket. Consensus estimates call for the creation of 150K jobs for the month of December while the unemployment rate is expected to up-tick to 8.7%. Today’s blowout ADP print may have set higher expectations for tomorrow’s data although in the past we have seen the report act as a poor indicator for the more encompassing NFP print. Despite the expected rise in the unemployment rate, tomorrow’s data should reinforce recent reports suggesting that the economy is indeed on proper footing. We continue to see a slight decoupling in the dollar / equities correlation which should become more pronounced later this year. Look for the dollar to take cues from the release with a move back into risk-assets likely to halt the dollar’s advance for now.