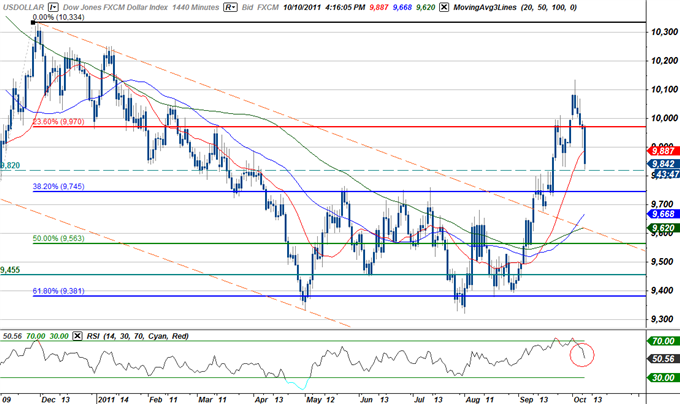 The greenback was down sharply for a fifth consecutive day with the Dow Jones FXCM Dollar Index (Ticker: USDollar) declining by 1.25% by the close of North American trade. The losses come on the back of stellar performance in US equity markets with the Dow, the S&P, and the NASDAQ surging 2.97%, 3.41%, and 3.50% respectively. News that German Chancellor Angela Merkel and French President Nicolas Sarkozy had pledged to devise a plan to shore up the ailed banking sector over the weekend saw a significant pickup in risk appetite, with the dollar sliding against all its major counterparts early in the session.

Although no details have been released yet, the leaders vowed to present a plan that would be approved by all member states no later than early November. With the underlying fundamentals still supporting the argument for further weakness in the risk trade, it’s likely this rally will face strong headwinds later in the week as the euphoria of a possible ‘European Fix’ quickly fades. Meanwhile the dollar has come under substantial pressure with the dollar index closing just above interim support at 9820 after breaking below 9900 in early US trade. The index moved a full 145% of its daily average true range, as advances in higher yielding, ‘risk currencies’ slammed the greenback. 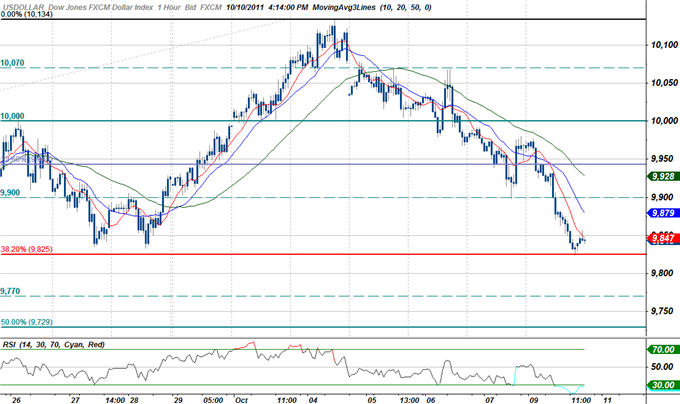 A closer look at the index attests to today’s steep sell-off, with the dollar holding just above key support at the 38.2% Fibonacci retracement taken from the August 1st advance. A break below interim support sees an increased risk for substantial losses for the dollar with subsequent floors eyed at 9770 and the 50% retracement at 9730. Topside resistance holds at 9900 and is backed by the 23.6% retracement at 9940 and the psychological 10,000 threshold.

The greenback fell against all four component currencies today, highlighted by a 2.02% decline against the euro and a staggering 2.23% decline against the Australian dollar. The euro’s rally may encounter strong headwinds as seen on a daily chart with key resistance seen at the 100% Fibonacci extension at the 1.3680 level. The aussie continues to benefit from investors seeking yields with the AUD/USD now more than 500pips off its October 4th low below the 0.94-handle. The Japanese yen saw the smallest gains, advancing a modest 0.12% against a weaker dollar. The low yielder also came under pressure today, sliding against all its major counterparts save the dollar as traders chased yields amid improving risk appetite.

Tomorrow’s economic docket presents little in the way of event risk with only the NFIB small business optimism and IBD/TIPP economic optimism surveys on tap. With the calendar remaining rather light this week, dollar price action will be largely dictated by broader market sentiment with a continued rally in stocks likely to pressure the greenback even lower.

Join Michael for a Live Webinar on Scalping Strategies tomorrow at 12:30GMT.