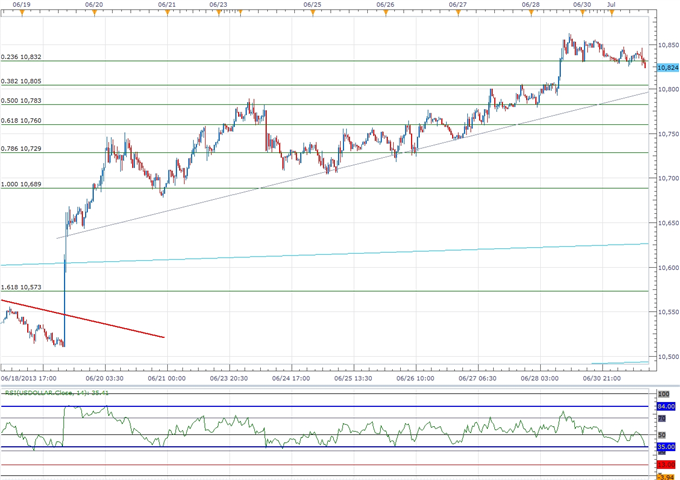 USD Weakness to Be Short-Lived, JPY Outlook Weighed by BoJ

The Dow Jones-FXCM U.S. Dollar Index (Ticker: USDollar) is 0.14 percent lower from the open as Construction Spending increased 0.5 percent in May versus forecasts for a 0.6 percent print, while the ISM Manufacturing employment component contracted for the first time since 2009, which certainly does not bode well for the highly anticipated Non-Farm Payrolls report due out on Friday. As the greenback struggles to hold above the 23.6 percent Fibonacci retracement around 10,832, we may see a move back towards the 38.2 percent retracement (10,805) for a test of interim support, and the reserve currency may continue to carve a series of higher highs paired with higher lows as tapering the asset-purchase program becomes a growing discussion at the Federal Reserve. In turn, we will look for more opportunities to buy the USDOLLAR on a short-term pullback, and the bullish trend should continue to take shape in July amid the shift in the policy outlook. 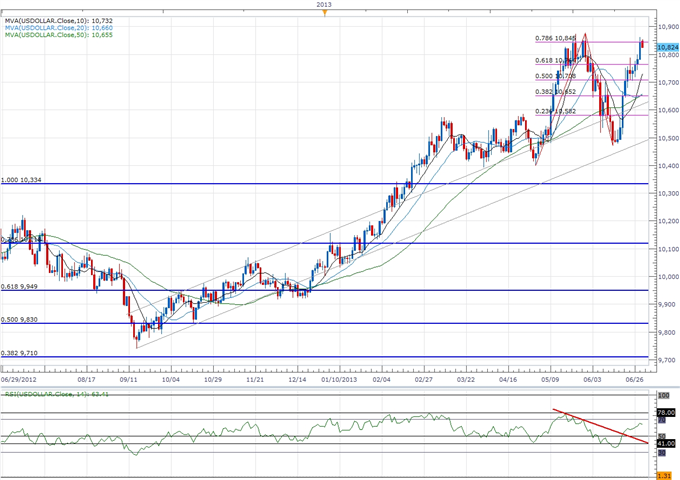 Despite expectations for a stronger recovery in the second-half of the year, San Francisco Fed President John Williams argued that ‘it’s still too early’ to scale back on quantitative easing amid the persistent slack in the real economy, and went onto say that ‘it is also prudent to wait a bit and make sure that inflation doesn’t keep coming in below expectations, possibly signaling a more persistent decline in inflation’ as price growth continues to hold below the 2 percent target. Nevertheless, it seems as though the FOMC is slowly moving away from its easing cycle as the economy gets on a more sustainable path, and we may see the central bank lay out a more detailed exit strategy in the coming months as the economic recovery gradually gathers pace. Although we anticipate a more meaningful run at the 10,900 handle, we may see a test of the 61.8 percent Fib (10,764) before it resumes the advance from the previous month, and the bullish sentiment surrounding the reserve currency should pick up over the near to medium-term as market participants scale back bets for additional monetary support.

Three of the four components advanced against the greenback, led by a 0.95 percent rally in the Australian dollar, while the Japanese Yen bucked the trend as the low-yielding currency fell 0.57 percent against its U.S. counterpart. Indeed, the USDJPY looks poised for a higher high as it carves a higher low around the 94.00 handle, but the pair appears to be running into interim resistance around the 99.00 region – the 61.8 percent Fib from the May decline. In turn, we may see a short-term pullback in the exchange rate, but the pair remains poised to push higher in the second-half of the year amid the deviation in the policy outlook. As the Bank of Japan (BoJ) remains poised to further embark on its easing cycle over the coming months, we may see a more meaningful move at 104.00, and we will continue to buy dips in the USDJPY as the FOMC drops its dovish tone for monetary policy.