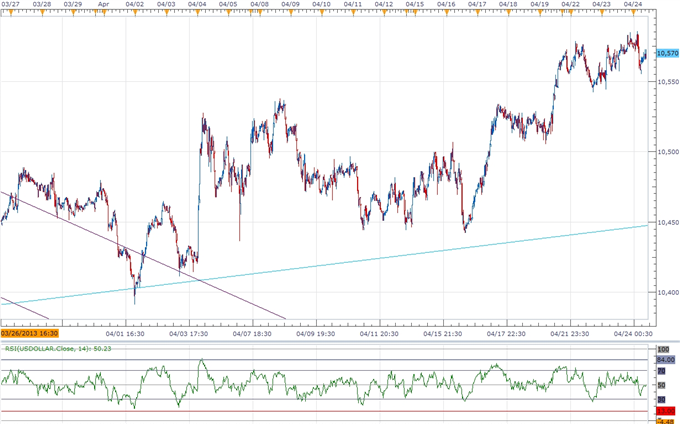 USDOLLAR to Consolidate Ahead of 1Q GDP- 10,600 Still in Sight

The Dow Jones-FXCM U.S. Dollar Index (Ticker: USDollar) is trading 0.05 percent lower from the open as demands for U.S. Durable Goods tumbled 5.7% in March amid forecasts for a 3.0% decline. However, as the 30-minute relative strength index bounces back ahead of oversold territory, the greenback may consolidate over the next 24-hours of trading, and the reserve currency may hold a narrow range ahead of the advance 1Q GDP report on tap for later this week as the world’s largest economy is expected to grow an annualized 3.0% during the first three-months of 2013. As the economic recovery gradually gathers pace, the bullish sentiment surrounding the dollar should spark a more meaningful run at the 10,600 figure, and the greenback may track higher ahead of the next FOMC interest rate decision on May 2 should the data dampen expectations for additional monetary support. 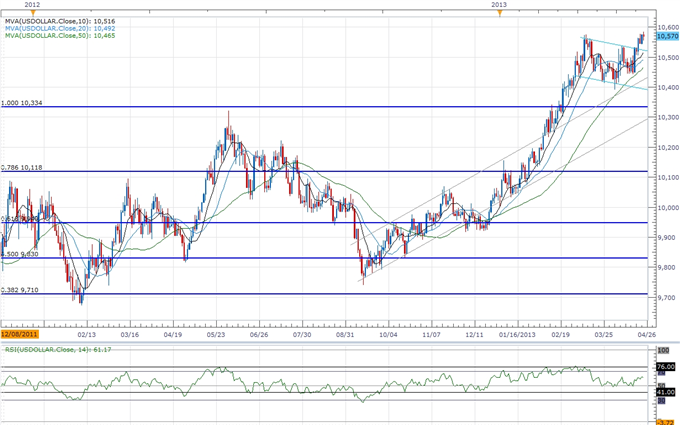 As the outlook for growth improves, it seems as though the FOMC will keep its asset purchase program capped at $85B/month, but we may see a growing number of central bank officials start to discuss a tentative exit strategy as the economy gets on a more sustainable path. Although the Fed remains committed to its highlight accommodative policy stance, the budding recovery in the housing market along with the resilience in private sector consumption may prompt the committee to scale back on quantitative easing over the coming months, but it seems as though the FOMC will move away from its zero interest-rate policy (ZIRP) before winding down its balance sheet as the central bank adopts a ‘qualitative approach’ for monetary policy. In turn, we should see the bullish flag formation continue to take shape in the month ahead, and the index looks poised to mark fresh yearly highs in the coming days as market participants curb bets for more QE.

Two of the four components advanced against the greenback, led by a 0.21 percent rally in the British Pound, and the sterling may continue to track higher over the next 24-hours of trading as the economic docket is expected to show U.K. returning to growth in 2013. As the GBPUSD preserves the upward trending channel carried over from the previous month, a positive development may trigger a run at the 1.5400 region, but a triple-dip recession in Britain may prompt the pound-dollar to give back the rebound from 1.4830 as it fuels speculation for more easing. However, as the Bank of England (BoE) sees above-target inflation over the policy horizon, the majority may support a neutral policy stance throughout 2013, and we may see the central bank slowly move away from its easing cycle later this year as it anticipates a slow but sustainable recovery in the U.K.