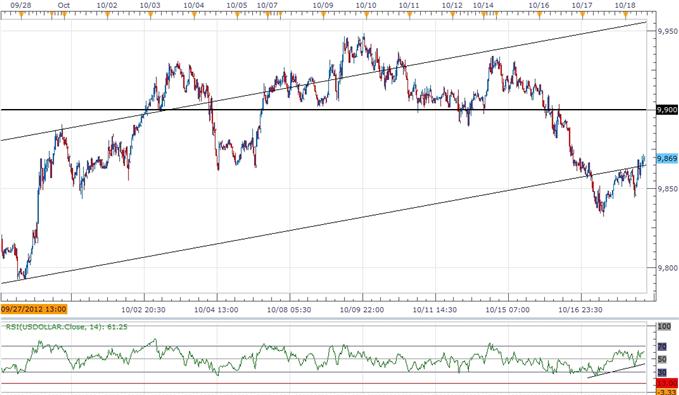 The Dow Jones-FXCM U.S. Dollar Index (Ticker: USDollar) is 0.24 percent higher from the open after moving 63 percent of its average true range, and the greenback may track higher over the remainder of the week as it trades back within the upward trending channel carried over from the previous month. As currency traders scale back their appetite for risk, the index may work its way towards the top of the channel, but we may see a short-term pullback over the next 24-hours of trading as the 30-minute relative strength index flirts with overbought territory. However, the dollar may face additional headwinds over the near-term as the protracted recovery in the U.S. labor market continues to fuel bets for more Fed support, and the greenback may fail to maintain the rebound carried over from the previous month should former trendline support act as resistance. 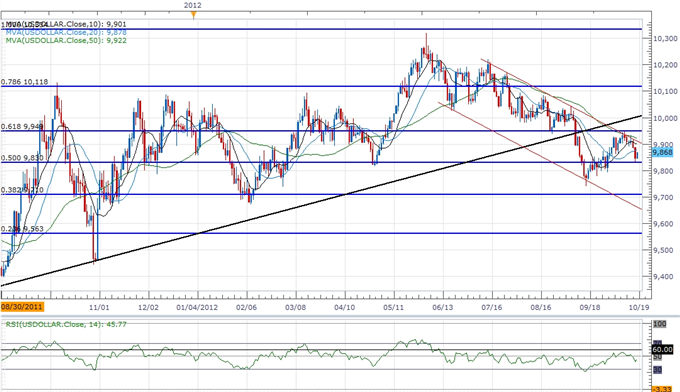 As market participants turn their attention to the EU Summit in Brussels, headlines coming out of the meeting will heavily influence trader sentiment over the remainder of the week, but the group of European policy makers may struggle to restore investor confidence as the governments operating under the monetary union maintain a reactionary approach in addressing the debt crisis. Should the EU fail to take on additional measures to stem the risks surrounding the region, we should see the shift away in risk-taking behavior gather pace over the coming days, and we may see the USDOLLAR make another run at the 61.8 percent Fibonacci retracement around 9,949 as it benefits from safe-haven flows. However, as the daily chart continues to reflect a bearish outlook for the greenback, we may see 50.0 percent Fib (9,830) give way, and the index may ultimately make another run at the 38.2 percent retracement around 9,710 as the FOMC maintains a dovish tone for monetary policy.

The greenback strengthen across the board, led by a 0.43 percent decline in the Japanese Yen, and the USDJPY may continue to track higher over the near-term as it breaks out of the downward trending channel carried over from the end of June. Indeed, the bullish breakout in the dollar-yen may continue to take shape as the Bank of Japan maintains its pledge to ease monetary policy further, but we will keep a close eye on the relative strength index as it approaches overbought territory. Nevertheless, as the BoJ struggles to achieve the 1 percent target for inflation, positive real interest rates in Japan may continue to increase the appeal of the Yen, and we may see the pair fail to maintain the rebound from 77.42 as it struggles to hold above the 200-Day SMA (79.38).