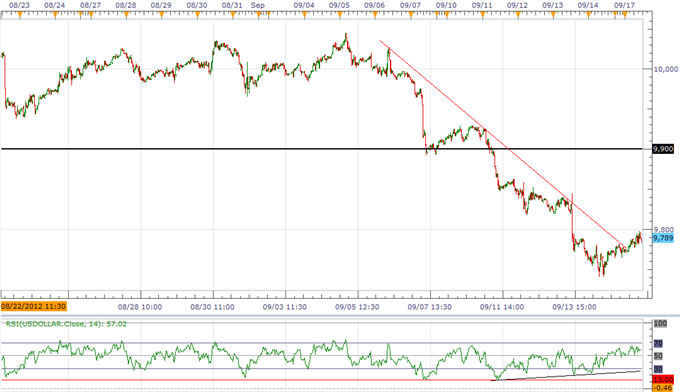 The Dow Jones-FXCM U.S. Dollar Index (Ticker: USDollar) remains 0.23 percent higher from the open after moving 74 percent of its average true range, and the reserve currency may continue to retrace the selloff from the previous week as it breaks the downward trend from earlier this month. In turn, we should see a short-term correction take shape over the coming days, but we will keep a close eye on the 30-minute relative strength index as it approaches overbought territory. Although risk trends continue to dictate price action across the currency market, we have a slew of Fed hawkish scheduled to speak this week, and central bank officials may show a mixed attitude towards the new asset purchase program as the world’s largest economy faces a limited risk for a double-dip recession. 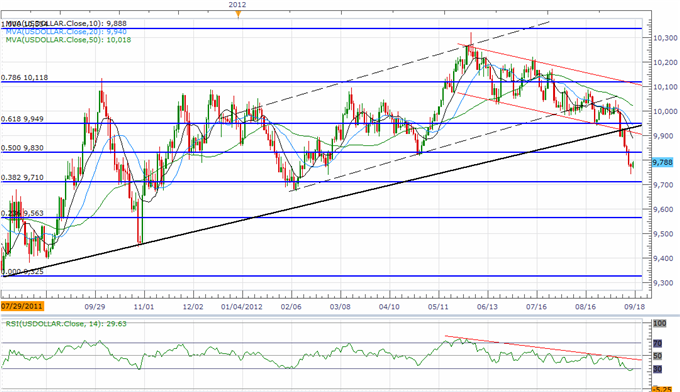 Indeed, FOMC voting member Jeffrey Lacker, who dissented against the latest decision, argued that the expansion in the central bank balance sheet will have a ‘greater effect on inflation and a minimal impact on jobs’ as monetary policy remains a blunt instrument, and endorsed a wait-and-see approach as the new initiatives makes the exit strategy ‘riskier.’ In light of the recent remarks by Mr. Lacker, we may see a growing rift within the central bank, and we may see a growing number of Fed officials talk down speculation for additional monetary support as the economic recovery is expected to gradually gather pace going forward. As the USDOLLAR holds above the 38.2 percent Fibonacci retracement around the 9,710 figure, the rebound from 9,740 may pick up in the coming days, but we would like to see the relative strength index break the downward trend carried over from the end of May to see a larger advance in the index. As a result, former support around the 61.8 percent Fib (9,949) may now serve as resistance, and the dollar may face additional headwinds over the near-term as Fed Chairman Ben Bernanke keeps the door open to expand the balance sheet further.

The greenback strengthened against three of the four counterparts, led by a 0.51 percent decline in the Australian dollar, and the high-yielding currency may weaken further over the next 24-hours of trading should the Reserve Bank of Australia show a greater willingness to ease monetary policy further. Indeed, the RBA Minutes may highlight a weakening outlook for the $1T economy as China – Australia’s largest trading partner – faces a greater risk for a ‘hard landing,’ and the central bank may sound increasingly cautious this time around as Governor Glenn Stevens sees the resource boom coming to an end over the next 12 to 24 months. In turn, market participants are pricing a 45 percent chance for a 25bp rate cut at the October 2 meeting, but see the cash rate falling by nearly 75bp over the next 12-months according to Credit Suisse overnight index swaps. As the AUDUSD maintains the downward trend from 2011, with the RSI holding below resistance (67), we will maintain our bearish forecast for the aussie, and the pair may face a large selloff as it appears to be carving out a double-top around the 1.0600 figure.