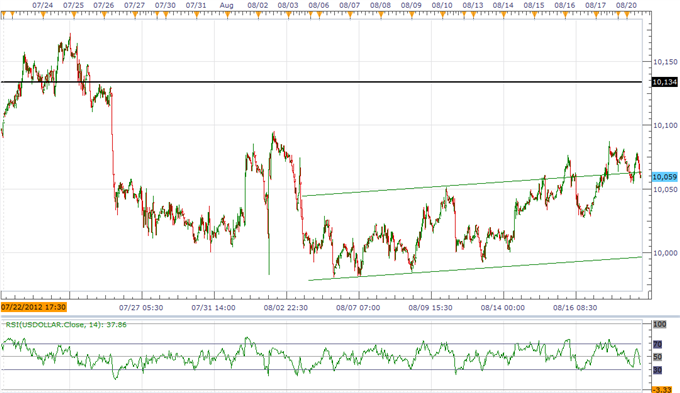 USD Consolidates Ahead Of FOMC Minutes, Index Poised For Breakout

The Dow Jones-FXCM U.S. Dollar Index (Ticker: USDollar) is 0.12 percent lower from the open after moving 55 percent of its average true range, and the lack of momentum to push back above the 10,100 figure may push the greenback back within the upward trending channel from earlier this month as the 30-minute relative strength index continues to move away from overbought territory. In turn, we may see the index consolidate ahead of the Federal Open Market Committee Minutes on tap for later this week, but the fresh batch of central bank rhetoric may encourage a bullish outlook for the dollar as the board appears to be moving away from its easing cycle. As the dollar builds a short-term base around the monthly low (9,980), we will maintain our bullish forecast going into the end of August, and we may see the greenback appreciate further throughout the second-half of the year should the Fed continue to talk down speculation for another round of quantitative easing. 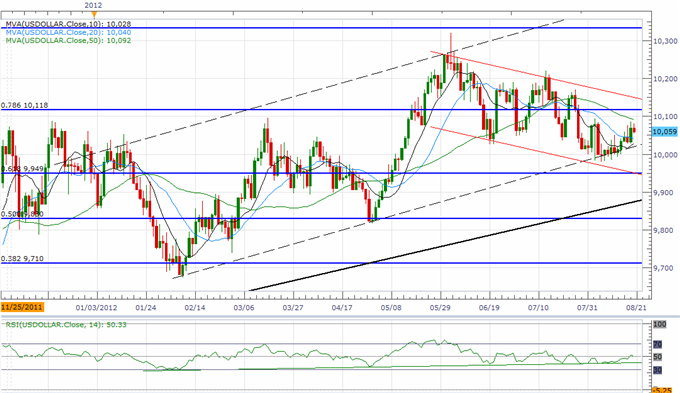 Indeed, the FOMC Minutes may pave the way for a dollar rally as market participants turn their attention to the Jackson Hole Economic Policy Symposium scheduled for the end of the month, and a less dovish statement may spark a bullish breakout in the index as it dampens the scope for QE3. As Fed officials see a limited risk for a double-dip recession, we should see the FOMC stick to the sidelines throughout the remainder of the year, and Chairman Bernanke may sound more upbeat towards the real economy as the recovery gradually gathers pace. In turn, we should see the USDOLLAR continue to come off of trendline support, and the index may ultimately threaten the downward trending channel carried over from June as the bullish trend from earlier this year continues to take shape.

The dollar weakened against all four counterparts on Monday, led by a 0.32 percent advance in the Australian dollar, while the Japanese Yen halted the five-day slid as it climbed 0.21 percent against its U.S. counterpart. As the USDJPY struggles to hold above the 100-Day SMA (79.60), we may see the pair consolidate in the coming days, but the deviation in the policy outlook continues to cast a bullish forecast for the dollar-yen as the Bank of Japan continues to embark on its easing cycle. As the BoJ continues to pursue its 1 percent target for inflation, we may see the central bank take a more aggressive approach it curbing the downside risk surrounding the region, and Japanese policy makers may put increased pressure on the central bank to intervene in the currency market as the persistent strength in the local currency continues to drag on the recovery. In turn, we would like to see a meaningful move above the 80.00 figure to see a larger move to the upside, and we will be keeping a close eye on the relative strength index as it approaches overbought territory.