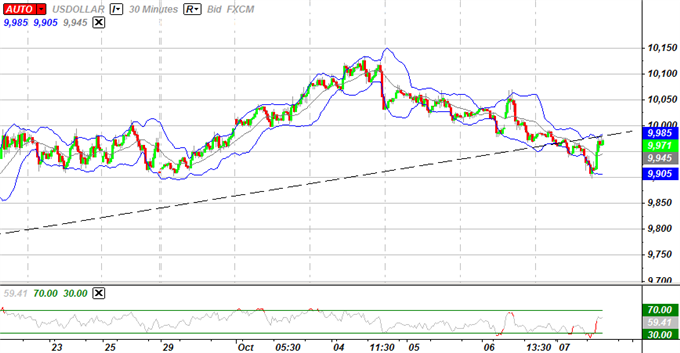 Although the Dow Jones-FXCM U.S. Dollar Index (Ticker: USDollar) remains 0.06% lower from the open, the rebound from 9,898 looks poised to gather pace as the ongoing turmoil in Europe bears down on investor confidence. As the 30-minute relative strength index bounces back from oversold territory, the USD should trend higher throughout the remainder of the week, and we may see a continuation of the upward trend from back in September as the flight to safety resurfaces. In turn, the greenback may work its way back above 10,000 over the following week, and the gauge may make another run at the 78.6% Fibonacci retracement around 10,117 as the reserve currency benefits from safe-haven flows. 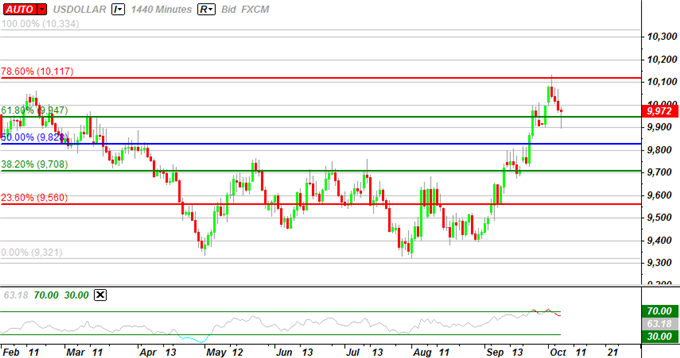 As the USD finds short-term support around 9,900, we should see the index retrace the decline from 10,134, but we may see the greenback face range-bound price action during the beginning of the following week as the Fed is scheduled to release its meeting minutes on October 12. The policy statement is likely to highlight the ongoing weakness within the real economy as the U.S. faces an increased risk of a double-dip recession, and the FOMC may keep the door open to conduct another round of quantitative easing in an effort to stem the downside risks for growth and inflation. At the same time, the minutes may underscore a growing rift within the committee as policy makers expect economic activity to gather pace over the coming months, and there could be an argument to carry a wait-and-see approach into the following year as the stickiness in price growth heightens the risk for inflation. Should the Fed soften its dovish tone for monetary policy, easing expectations for QE3 should help to prop up the greenback, and we may see the USD continue to recoup the losses from earlier this year as market participants scale back their appetite for risk.

Two of the four components weakened against the greenback on Friday, led by a 0.35% decline in the Euro, and the single-currency is likely to face additional headwinds over the near-term as the sovereign debt crisis comes back into focus. Indeed, Fitch lowered the credit rating for Spain and Italy, citing the slowdown in growth paired with the ongoing turmoil within the financial system, and the heightening risk for contagion continues to cast a bearish outlook for the EUR/USD as European policy makers struggle to restore investor confidence. In turn, we may see an increased reliance on the European Central Bank to address the risks for the region, and the ECB may employ additional policy tools to shore up the ailing economy as the fundamental outlook for the euro-area remains clouded with high uncertainty. As a result, we may see the euro-dollar give back the rebound from 1.3145, and the exchange rate may fall back towards the 38.2% Fib from the 2009 high to the 2010 low around 1.3100 as the debt crisis continues to bear down on market sentiment.