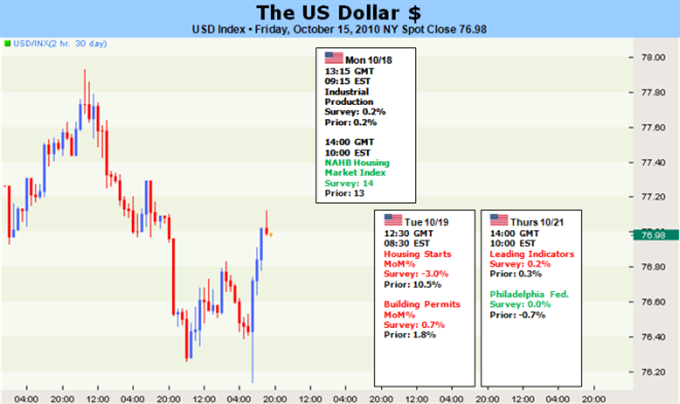 Fundamental Outlook for US Dollar: Neutral

There is little arguing that the US dollar has been mired in a significant bear trend. Through this past week, the currency (on a trade-weighted basis) dropped to its lowest level this year under the pressure of a remarkably stable descending trend channel. It may seem that this is a pretty common trend given the stability of gold, Treasuries or the S&P 500. However, these assets themselves are generally priced in dollars. This single currency’s painful performance is the anchor for the abnormally high level of correlation (some of them historically aberrant) across the financial markets. That being said, the greenback is merely the reflection of fundamental and speculative biases that will eventually reach a point of critical mass. And, considering the Dollar Index recently tested a rising trendline that began with the financial crisis low and put in for a subsequent reversal; we may have seen the first step to a meaningful turn. Now, what is needed is a meaningful fundamental rebalancing.

The most remarkable dynamic behind the dollar’s performance this past month (the source of the seemingly unlimited selling pressure) has been the constant speculation surrounding the Fed’s response to a sputtering economic recovery. In the past few weeks, the potential for a second round of stimulus seems to be considered a near certainty. That being said, if the market is in agreement that another expansion of the monetary reins is in order; that likely means that scenario has already been priced in. If we have not yet reached this level of oversaturation, we are very near it. Considering equities performance in the face of disappointing economic developments, Treasuries steady correlation to equities and the consistent decline in market rates; it is clear that market is heavily unbalanced. From here, the only ambiguous aspect of this situation that could still supply dollar-selling and risk-buying momentum is the size and pace of a new program coming November 3rd. For that reason, tabs should be kept on the many Fed member speeches due this week. Tuesday will be particularly dense. That being said, policy officials rarely like to commit to details; and therefore, a lack of clarity could work in the greenback’s favor.

If the past has taught us anything, the Fed could draw inspiration and encouragement for the size of a necessary stimulus program from the assessments of the financial stability of domestic markets. On that note, the central bank may very well be invested in the 3Q earnings season which really build speed in the coming week. This is particularly true for banks which are an especially sensitive group for their reflection of market rates and their habit of hording the first round of stimulus funds. And yet, the FOMC’s interest in this cyclic fundamental affair is secondary. The greater influence is likely to be seen in risk appetite trends themselves. With the market spent on stimulus speculation, positioning could be in a vulnerable place should the business sector not support the rosy forecast current market prices imply. Furthermore, with the market already near-certain of a stimulus package, it will be difficult to put a positive spin here.

Outside of the big themes, the US docket is generally very light over the coming week. Consequently, Chinese 3Q GDP will likely have a bigger impact on the dollar and US markets than any scheduled indicator from the US docket. This is the first of the advanced economy growth readings for the period. Also, keep an eye on the G20. They won’t likely come up with any FX policy; but you never know.- JK