Stocks on Wall Street mostly ended on an upbeat this past week, with the S&P 500 and Dow Jones Industrial Average rising about +0.71% and +0.87% respectively. It was the tech sector that underperformed, with the Nasdaq Composite falling about -0.09%. An initial push higher in Treasury yields helped bolster cyclical shares, but that narrative slightly reversed on Friday.

The worst Michigan consumer sentiment reading since 2011 casted a shadow of doubt over the health of the US economic recovery despite a recently rosy non-farm payrolls report. The US Dollar took a hit, underperforming its major counterparts. The drop in global yields on Friday was relatively beneficial to the Japanese Yen, which outshined its peers to wrap up the week.

The New Zealand Dollar may be a closely watched currency next week as the RBNZ is anticipated to deliver a 25-basis point rate hike, a first from the developed world since the onset of the pandemic. Traders will be keen to see how far the central bank could take monetary tightening in the near-term, which also leaves some room for disappointment if the pace will be much slower.

All eyes will also shift to the FOMC meeting minutes, where the central bank could reiterate its confidence in the broader economic outlook. If such an outcome sends Treasury yields higher again, the Dow Jones may outperform. USD/CAD is eyeing Canadian CPI data, with AUD/USD looking to Australian jobs figures. What else is in store for markets in the week ahead? 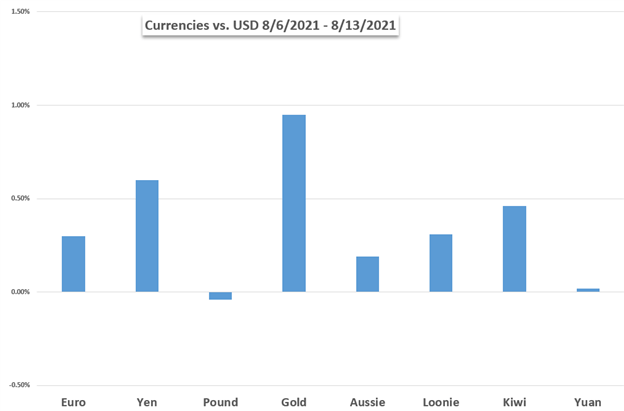 The Dow Jones and S&P 500 rose as the Nasdaq 100 ranged. Treasury yields seem to be on the rise, with stocks eyeing Fed Chair Jerome Powell, FOMC Minutes and US retail sales data.

Stronger GDP growth in the US than the Eurozone this year and an earlier tightening of US monetary policy will likely continue to put downward pressure on EUR/USD, taking it to new 2021 lows.

Bitcoin is set to print its 4th weekly green candle in a row, the first time this has happened since late January when prices rallied to a fresh all-time high just a few weeks later.

The Australian Dollar continues to face headwinds from a number of fronts with divergencies in risk assets, RBA/Fed tapering plans and Chinese Crackdowns.

GBP ends the week with mixed performance as July jobs, CPI and PPI data will be in focus next week

The Dollar ended this past week with an impressive tempo on a reversal from 93.20 for the DXY and 1.1700 for EURUSD. While ranges look the more feasible path next week, it’s important to pick the proper measure.

US equities gained again this week with fresh all-time-highs in both the Dow and the S&P 500.

Crude oil prices defended critical support for the second time this week– bears are on notice. These are the levels that matter on the WTI weekly technical chart.

The Australian Dollar faces actionable trade setups versus the US Dollar, British Pound, and Japanese Yen. Here are the levels to watch.

The negative slope in the 50-Day SMA (1.3884) casts a bearish outlook for GBP/USD amid the string of failed attempts to push back above the moving average.