Facing the critical decision to either extend a two-month advance and clear a 10-month congestion pattern or turn back into the broad range, the Dollar chose to follow the latter course to end this past week. The ICE’s trade-weighted ICE Dollar Index held the former July swing high at 93.20 and put some pace on the correction from that boarder through Friday. The acceleration on the retreat was notably event-driven with a particularly severe shortfall in the University of Michigan consumer confidence survey. That should matter to technical traders because it suggests the tempo into next week may not be so easy to maintain without additional motivation from the headlines or economic docket. Generally-speaking, the financial markets are struggling with building momentum, and the Dollar is unlikely to be spared that liquidity and volatility curb. 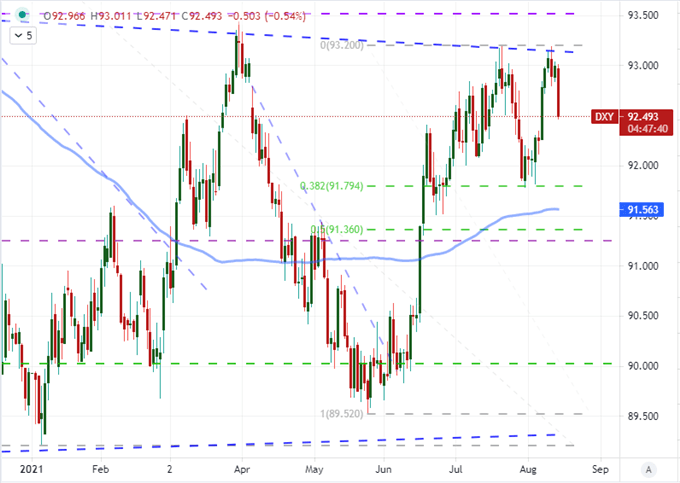 Another point against the Greenback’s wholesale bearish potential in the week ahead, is the inconsistency across the various Dollar-based majors. For EURUSD (the principal component of the DXY), the Friday move and pronounced technicals are perhaps the ideal. Meanwhile, other majors that are ranging like USDJPY don’t have wide boundaries to move within; and pairs like AUDUSD, USDCAD and NZDUSD are still holding to tight congestion. If all of these crosses start to follow the Dollar’s slide against the Euro, we may have something more substantial to work with. Yet, in practical terms, I believe the focus on the late-August / early-September speculation on Fed intent will work against a strong technical move. That said, my interest for the Dollar in the week ahead will be on ranges. Taking a look at the weekly chart of the DXY there is a large range in play down to approximately 89.50, but I doubt we will stretch that far within the span of the week. The active levels on that index for my radar are 93.20 to 91.80 (as 38.2% Fib of the May to July move) and 91.25 as the midpoint of the 2008 low to 2017 bull wave.

Chart of the DXY Dollar Index with (Weekly) 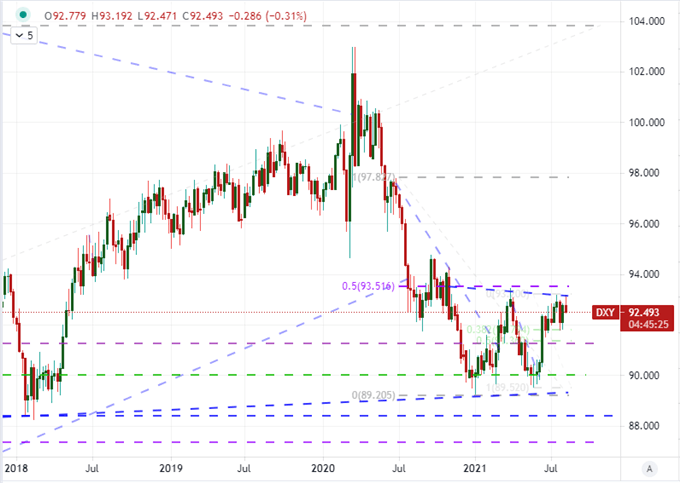 Among the Dollar-based majors, EURUSD is appealing for the scale of its range from 1.1700 to 1.2250, I’m mindful of how much of this scale we can cover given the backdrop in market conditions. At the same time, a more modest range like USDJPY’s 110.75 to 108.75 doesn’t look worthy of the risk/reward as it starts the new week in the dead center of the pattern. For a range based setup, I actually like AUDUSD. That may seem a misnomer because the pair is actually in a tight range between 0.7420 to 0.7320, but clearing this congestion (only a bullish resolution would appeal for me) could generate some short-term charge to spur a bigger move up to potentially 0.7550. 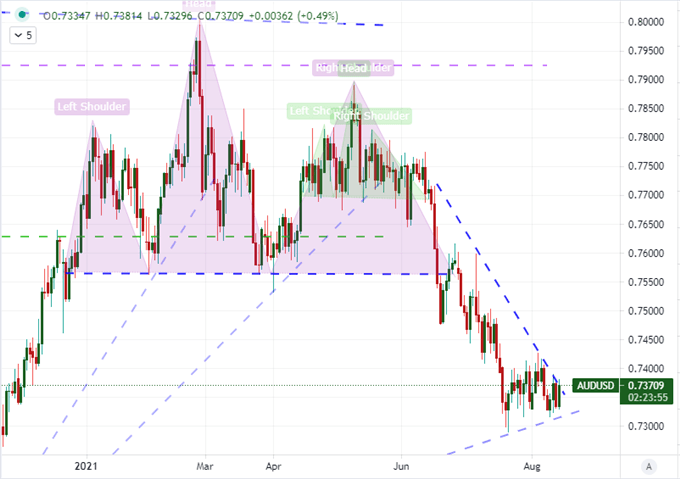 In generally, the Dollar will enter the new week on a bearish compass setting, so it seems reasonable to find options that align to that bearing. That said, I like to have options prepared for alternative scenarios. So, taking the concept I laid out for the an AUDUSD breakout that can pressure a larger range move within a week, it seems GBPUSD is in a position to break in favor of the Greenback with a similar technical pattern. In practical terms, that would be a break from the tight two-weeks congestion below 1.3800 which could open up momentum down to the neckline on a large 2021 head-and-shoulders pattern down around 1.3600. 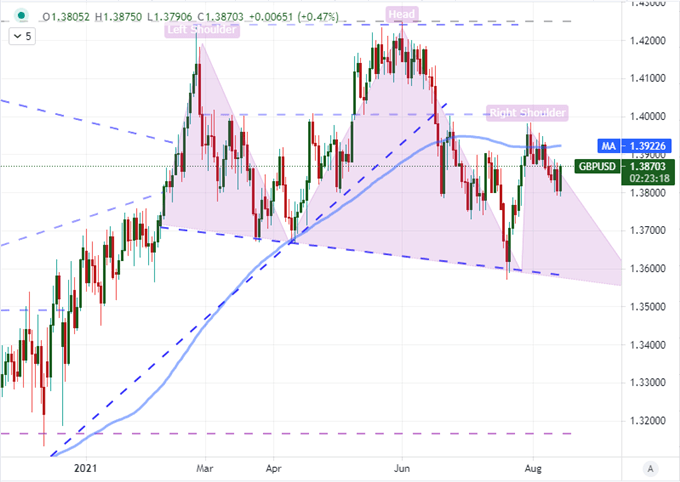 For the fundamentally curious, a chart worth watching over the week ahead is the Dollar’s alignment to markets that imply Fed rate expectations. There are different assets that can offer that context, but I like the yield differential between the active nearby and December 2022 Fed Funds futures contracts. The rolling 60-day correlation between currency and rate speculation has been consistently strong this year. Dollar movement doesn’t have to follow each wobble in yield forecasting, but assessing the depth of support from this theme in the event of any strong movements on the FX side would be wise. 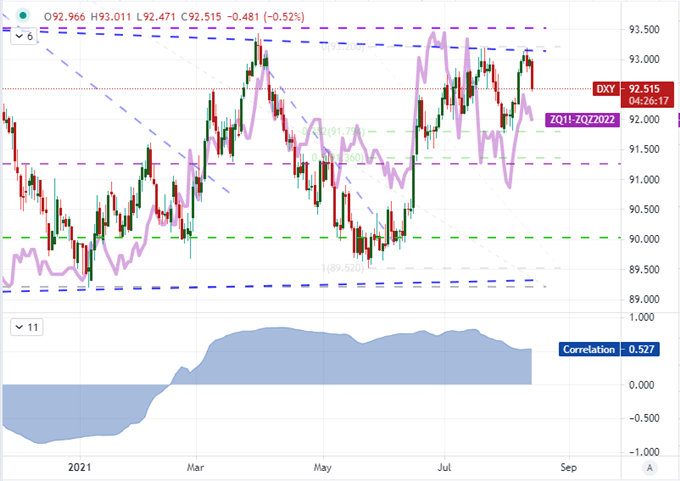 Finally, a look at speculative positioning there is a very different view of the market from the different participant groups in the market. I ran a Twitter poll at the start of this past week in which the majority believed the US Dollar was due a strong bullish break via EURUSD (below 1.1700) in the near-term. That did not come to fruition. Meanwhile, positioning among retail FX traders at IG are leaning into the range. For the likes of AUDUSD, the approximately 2,400 traders holding positions were 65 percent net long. Even more substantial, of the more than 4,500 people in a EURUSD position via the IG trading platform, 68 percent were long. With a longer time frame, speculative futures traders measured by the CFCT’s COT (Commitment of Traders) report find the net long view the more probable course ahead. 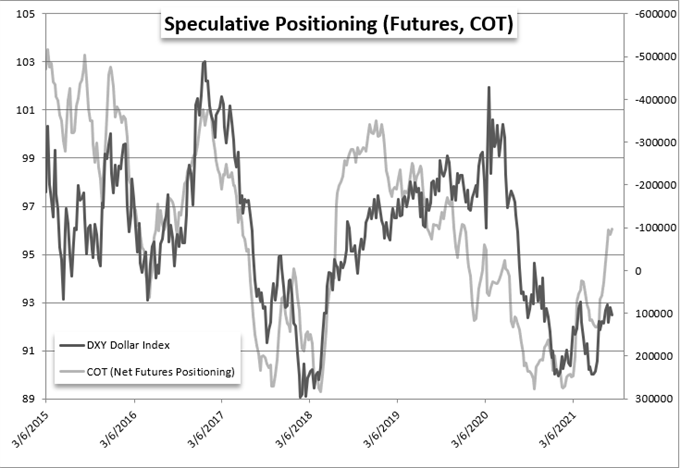