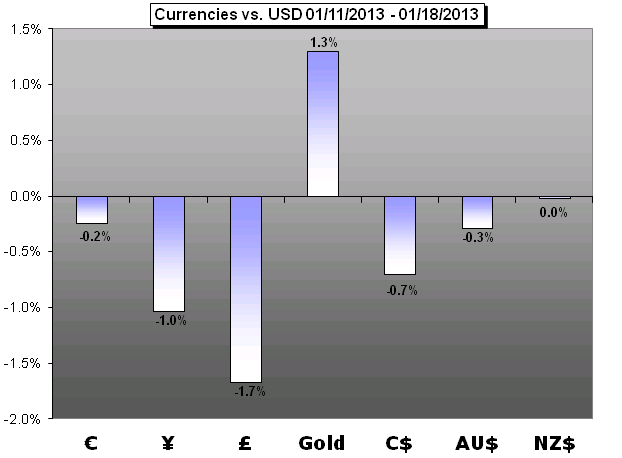 Dollar Advance Despite Risk Hinting at a Stronger Bull Trend?

The S&P 500 managed to push to fresh, five-year highs and the yen crosses soared to multi-year highs of their own this past week. Under most circumstances, the highs for these two different ‘risk sensitive’ benchmarks would signal to us that risk appetite trends were in high gear. However, if that were the case, why was the US Dollar – the world’s reserve currency – trading at a five-month high?

The Euro finished the week effectively unchanged against the US Dollar, but two tests of the psychologically significant $1.34 mark suggest traders are ready and raring to force a break higher.

The Japanese Yen had another weak week, but it was not the worst performing major currency. Instead, that title goes to the Swiss Franc, which the Yen paced by +1.21%. It was also slightly stronger against the British Pound, which it gained +0.61% against. That’s where the good news ends.

Australian Dollar May Struggle to Find Bid Despite Sticky Inflation

The Australian dollar struggled to maintain the rebound from the beginning of the year, with the AUDUSD slipping to a low of 1.0484, and the high-yielding currency may depreciate further in the week ahead as the weakening outlook for the $1T economy raises the scope for additional monetary support.

Gold continued its advance from last week with the previous metal advancing 1.53% to trade at $1688 at the close of trade in New York on Friday. The advance has taken bullion into key resistance at $1693 as global equity markets pushed to multi-year highs and commodities rallied on the back of strong economic data out of the US and China.