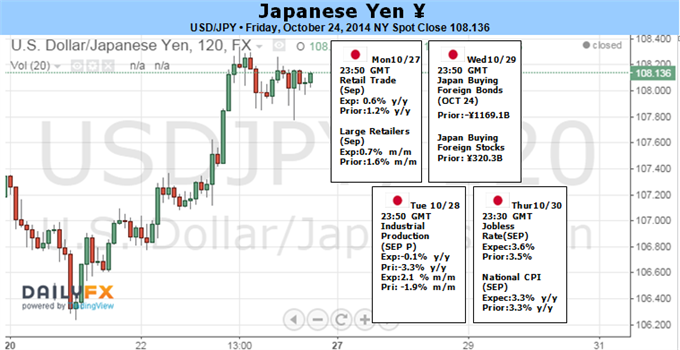 The fundamental outlook for USD/JPY remains bullish as Federal Open Market Committee (FOMC) moves away from its easing cycle, but the dollar-yen may struggle to press fresh highs next week should the Bank of Japan (BoJ) refrain from further expanding its asset-purchase program.

With the Fed’s QE exit largely priced-in, the forward guidance for monetary policy is likely to have a greatest impact on the USD/JPY, and we will favor a further appreciation in the greenback should the central bank show a greater willingness to remove the zero-interest rate policy (ZIRP) in 2015. On the other hand, the fresh batch of central bank rhetoric may drag on interest rate expectations as the majority remains in no rush to normalize policy, and we may see a larger correction in the reserve currency should the central bank look to retain its highly accommodative policy stance for an extended period of time.

In contrast, market participants are still looking for a further expansion in the BoJ’s asset-purchase program as lower energy costs curb the outlook for inflation, and the Japanese Yen may face additional headwinds over the near-term should Governor Haruhiko Kuroda take additional steps to stimulate the ailing economy. However, the BoJ may stick to its current policy as the central bank head remains confident in achieving the 2% target for price growth, and the Yen may outperform against its major counterparts should market participant pare bets of seeing additional monetary support in Japan.

With that said, the USD/JPY may extend the recent series of higher highs & lows on more easing from the BoJ along with a less-dovish statement from the Fed, but the pair may fail to retain the rebound from 105.18 should both central banks disappoint. - DS