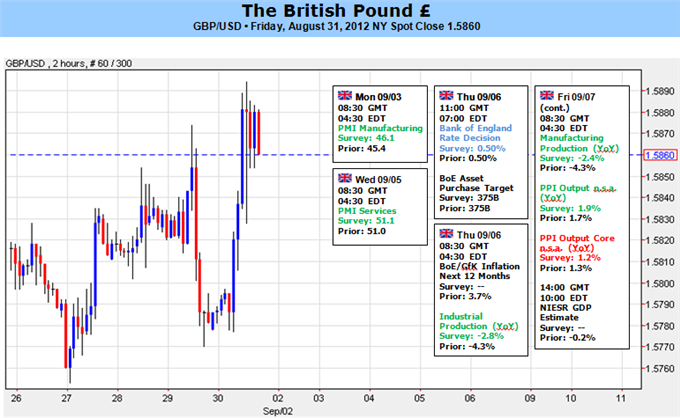 The British Pound retraced the decline from the August high (1.5911) as the economic docket encouraged an improved outlook for the U.K. and the sterling may track higher going into September as the Bank of England is widely expected to maintain its current policy next week. Indeed, the BoE interest rate decision may prop up the sterling as the central bank keeps the benchmark interest rate at 0.50% while maintaining its asset purchase program at GBP375B, but the meeting may ultimately turn into a non-event should the Monetary Policy Committee refrain from releasing a policy statement.

The GBPUSD has certainly extended the advance from the previous month after Governor Mervyn King talked down speculation for a rate cut, and we may see the bullish momentum continue to gather pace as the central bank reverts back to a wait-and-see approach. According to a Bloomberg News survey, 38 of the 39 economists polled see the BoE sticking to the sidelines in September, and the British Pound may show a bullish reaction to the meeting as market participants scale back bets for additional quantitative easing. However, central bank dove Adam Posen, who’s term ends in August, held a dovish tone for monetary policy and argued that the MPC should ‘more actively’ discuss purchasing assets beyond government debt in order to ‘more directly address the shortfalls in the British credit system.’ At the same time, BoE Markets Director Paul Fisher warned that the Funding for Lending scheme ‘will take a while to work through’ the real economy as commercial banks remain reluctant to lend, but went onto say that the program ‘could make a big difference’ as the region remains in a technical recession. As the BoE shows faith behind the new initiative, we may see the MPC endorse a wait-and-see approach throughout the remainder of the year, and the committee may slowly move away from its easing cycle as growth and inflation picks up.

As former resistance around 1.5740-50 appears to be acting as support, we should see the upward trending channel carried over from July continue to take shape, but we will be keeping a close eye on the relative strength index as it approaches overbought territory. Nevertheless, another string of positive U.K. data should continue to push the sterling higher, and we may see the GBPUSD may make a run at the 1.6000 figure should the developments sap expectations for more easing. - DS