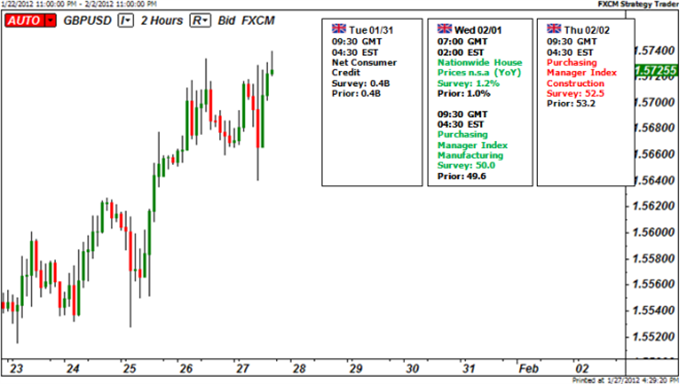 Broadly speaking, the British Pound continues to trade with overall risk sentiment trends, where the tug of war between an apparent pickup in the US recovery and the lingering Eurozone debt crisis continues to dominate price action. Traders got a bit of encouraging news on the growth front last week after the Federal Reserve made it loud and clear they do not intend to risk undercutting cautiously accelerating growth with a premature unwinding of accommodative monetary policy.

Indeed, Ben Bernanke and company extended their pledge to keep interest rates low by about 18 months, from mid-2013 to the end of 2014, and seemingly went out of their way to remind investors that additional asset purchases (QE3) were on the table. A risky asset rally amid hopes that an increasingly chipper US economy will help offset downturns in Europe and Asia expected this year would have room to flourish if not for ever-present fears that a mismanaged default within the common currency area will set off another global meltdown akin to that of 2008.

With this in mind, the spotlight is now on EU officials as they attempt to complete the dual objectives of sorting out the now almost-mythical “fiscal compact” meant to institutionalize budget discipline the region and securing agreement on private-sector involvement (PSI) in the second Greek bailout, where the government and banks have locked horns over the coupon rate on new longer-dated bonds to be swapped in for outstanding ones.

On Friday, European Economic Affairs Commissioner Olli Rehn said that a deal on PSI will be done “if not [that day], then over the weekend.” While markets have seen their share of bombastic pronouncements fizzle before and would normally take such pronouncements with a grain of salt, the jittery mood prevailing at present is likely to mean that a failure to live up to this timeline will see risk aversion begin to perk up across global exchanges, an outcome threatening to weigh on the British Pound. Needless to say, the reverse result is likely to start the week of on a positive note, which would be expected to be supportive for the UK currency.

From there, the focus turns to the EU leaders’ summit beginning on Monday. Policymakers will need to complete the operational details of the fiscal compact by the conclusion of the sit-down and convince the markets they’ve established a framework that can be implemented swiftly while still being sufficiently tough on offenders to be credible. Here too, success is likely to translate into gains for Sterling as it follows the spectrum of risky assets higher, and vice versa.

On the domestic data front, the January set of PMI figures headlines the docket. Manufacturing performance is expected to narrowly improve, returning to a neutral setting having after the sector contracted for the preceding three months. Construction- and service-industry growth is forecast to slow however. The trio of housing surveys from Hometrack, Nationwide and Halifax are also on tap. Another hefty dose of US data is also on tap, with ISM figures and the all-important Nonfarm Payrolls print warranting particular attention. - IS