Euro Takes out Highs, Aims for $1.35 – Does Rally Have Staying Power? 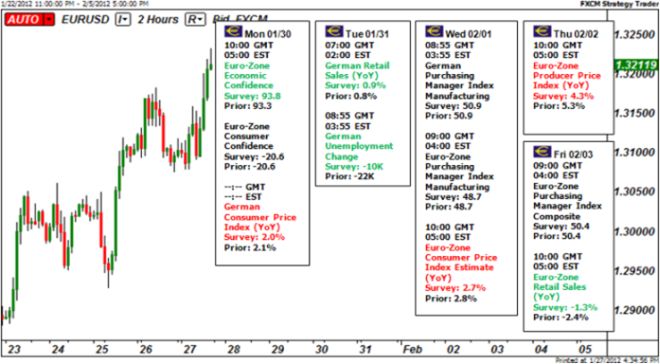 It is shaping up to be a make-or-break week for the resurgent Euro as a key European summit and US employment data headlines a busy week of event risk for forex markets. To get a sense for what we can expect, we take a look at what has happened thus far.

The Euro started this past week noticeably lower, but the EURUSD never looked back as it finished almost exactly at fresh multi-month highs through Friday’s close. The coming days could prove pivotal for the recently fast-rising Euro exchange rate, and it is little exaggeration to say that the coming days may decide whether the EURUSD stages a much larger recovery.

A European summit on Monday could set the pace for the Euro as we enter the new month of February, while Friday’s US Nonfarm Payrolls figures could likewise influence the Euro and broader financial markets. Markets are tired of listening to Angela Merkel, Nicolas Sarkozy, and fellow Euro Zone leaders commit to vague action plans for the sake of the Euro Zone. In other words – talk is cheap. The focus remains on whether Monday’s summit nails down commitments on the preliminary agreements set forth in the pivotal December meetings. Lack of real solutions could potentially derail the Euro’s sudden recovery.

The later US Nonfarm Payrolls report is always difficult to predict, and it is even more difficult to forecast how markets will react to the data. That said, a wave of stronger-than-expected US economic news leaves forecasts on the high side and there is ample room for disappointment. It seems that investors are growing increasingly complacent as the US S&P 500 trades steadily towards multi-year highs. Such strength in financial market risk appetite has reduced demand for the safe-haven US Dollar and boosted the relative attractiveness of the Euro. We believe that a sharply worse-than-expected NFP data print could have an important effect on the S&P 500. Given strong cross-market correlations, a bad labor numbers could potentially spark USD strength.

In the absence of major fundamental shifts, recent trends favor further Euro recovery versus the US Dollar. This isn’t to say that the Euro Zone crisis is in any way resolved; the opposite may be true as Greece faces the real short-term risk of a hard default. Yet the financial and popular media is saturated with stories about threats to the Euro Zone and to the single currency itself. In other words, the Euro may have reached a bearish sentiment extreme and is currently seeing an important near-term recovery.

One only needs to look at CFTC Commitment of Trader data to see evidence of a Euro sentiment extreme. Non-commercial futures traders, typically large speculators, are their most net-short Euros against the US Dollar in history and by a wide margin. Sentiment extremes and market turns are only clear in hindsight, but continued EURUSD short covering could potentially take the single currency to further highs. Now that the Euro has broken above key resistance at $1.3198, there seem to be few hard price levels until December’s high of $1.3548.

To be absolutely clear: we are still quite bearish on Euro fundamentals and believe the longer-term downtrend remains the most important. Yet markets like to overshoot in both directions, and there are real risks that the EURUSD could shake out further bears before resuming its downtrend. Needless to say, the coming week could prove pivotal for the resurgent Euro exchange rate. – DR