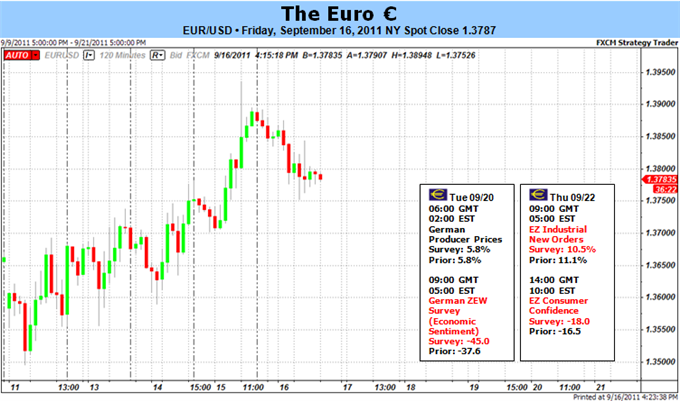 The Euro rallied sharply off of recent lows despite clear deterioration in Euro Zone fiscal crises, setting the stage for similar volatility and potential strength in the week ahead. Through mid-week we noted that Euro/US Dollar FX Options and Futures sentiment was at its most bearish extremes in quite some time. The sudden Euro rally reminded us that market sentiment is always at its most bearish at potential bottoms, and sharp corrections suggest that the EURUSD may be headed higher into the coming days.

It is exceedingly difficult to predict where the Euro Zone fiscal saga will twist next. Markets punished the Euro when it seemed almost certain that Greece would default. Indeed, the EURUSD fell precipitously as traders initially believed that AAA-rated Austria voted against the expansion of the European Financial Stability Facility. We now know that Austria’s parliament did not vote down the measures, and indeed they seem likely to pass.

Yet joint credit market intervention by the European Central Bank, US Federal Reserve, Bank of England, Bank of Japan, and Swiss National Bank arguably served as a warning sign. That most of the world’s most important central banks sought to ease market tensions suggests that the situation is likely more dire than many believe. The Euro immediately rallied on the news, but limited follow-through on EURUSD strength gives reason for caution.

Recent price action reminds us that currency pair swings can be far from intuitive, and even the most bearish fundamental forecast can give way to simple money flows. CFTC Commitment of Traders data shows that speculators (Non-Commercials) were recently at their most short net-short EURUSD since the pair traded near 1.22 in June, 2010. We frequently warn that sentiment extremes are only clear in hindsight; markets can remain extremely one-sided for extended periods of time. Yet the severity with which the Euro has bounced warns against aggressive short positions amidst such one-sided sentiment. Where does this leave us?

The Euro seems likely to retest recent spike-highs near the 1.3900 mark, but traders should always be careful of unexpected volatility on developments in ongoing fiscal crises. FX Options market volatility expectations have come down from recent 12-month peaks yet remain quite elevated. Indeed, traders should prepare for outsized moves and control risk accordingly. This means trading on smaller position sizes and possibly with wider stop loss levels to account for the increased likelihood of sharp price moves. Such market conditions likewise warn against aggressive bets that pairs will stick to trading ranges, and indeed volatility usually means that breakouts have a stronger chance of continuing through to the next major support or resistance levels.

Watch for potentially decisive moves in the EURUSD and other currencies in the days ahead. It promises to be another eventful week of price action. – DR